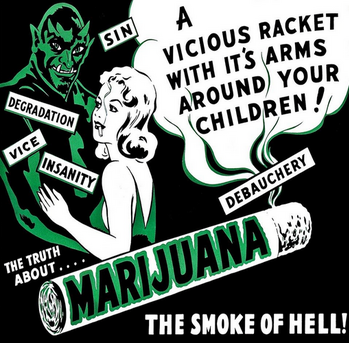 "Don't do drugs" is a stock aesop that has been sledgehammered into children's television shows at the request of the United States government. It usually results in anvilicious moralizing and very special episodes; though it can also be done well, with perspective and sincerity, particularly by artists who have firsthand experience with the downside of the drug scene.

Although drugs, both legal and illegal, can have devastating effects on the lives of their users (and have resulted in the untimely deaths of countless celebrities), Drugs Are Bad shows and commercials often exaggerate how bad they actually are, very commonly becoming a Clueless Aesop with all the Narm associated with it. Often, even the villains of shows, when presented with an opportunity to sell drugs for profit, will decline on the grounds that Even Evil Has Standards.

Alternatively, drugs make people feel wonderful the first time they take them, but every subsequent time the same drug (or a harder one) makes them feel worse than Hell. But it's too late because they're already "hooked" after the first time, and according to the gateway drug theory

, if you give a teen a marijuana cigarette, he'll inevitably wind up doing something harder. The theory has no proper scientific basis whatsoever (some people do, some people don't, and there's been tests done on animals, but it'd be pretty unethical to hand out pot to kids and see how many move on to crack), but science would just get in the way of some scare tactics.

On the other hand, many anti-drug advocates would argue that compared to all the rest of the ugly, violent history of the War On Drugs, simply advising kids to steer clear of them should be the most obvious, straightforward, and least controversial course of action possible. Although hyperbole can easily sabotage the intended message.

A common way to express this trope is via the character arc Descent into Addiction, which depicts a character's gradual slide into addictive behavior.

Note that the full name of the trope should be "Recreational Drugs Are Bad", which is not to say that prescription drugs can't be dangerous when abused. If you or the characters take the title at face value, you've got a case of Mistaken for Junkie.

It's hard to disagree that there was a considerable element of hypocrisy in Hollywood producing so many works with this message, considering how widespread drug use has always been in the entertainment industry. While the recent pendulum swing in the opposite direction may mean the industry is now admitting its own issues more honestly, that still may not constitute being objective about the matter (however one wishes to define objectivity).

Any story about Prohibition Era gangsters is likely to walk an odd tightrope, since Prohibition was rescinded and society no longer condemns alcohol the way it does other drugs, but gangsters murdering people to make a buck off the stuff are still likely to be portrayed very negatively (though, like pirates, they're also likely to be highly romanticized).

See also The Aggressive Drug Dealer, that monster from the '80s and '90s who finds middle-class suburbanite kids wherever they are and forces them to take his drugs. Contrast Functional Addict, where the negative effects of drugs are not portrayed as intensely. See also Addled Addict and Drunk Driver. See also Recovered Addict, who often delivers this Aesop, and Smoking Is Not Cool, where the moral is specifically about the downsides of tobacco. A song with this message is an Ode to Sobriety. For the opposite of this trope, when drugs and drug use are portrayed positively, see Drugs Are Good or Higher Understanding Through Drugs. Compare and contrast to Anvilicious.

Please don't use real-life examples. This page is not about whether drugs are actually bad; it is about how said badness is depicted in the media.

One section is from the addict's P.O.V. as they cry out to a master that "promised only lies".