Literature / House of the Scorpion 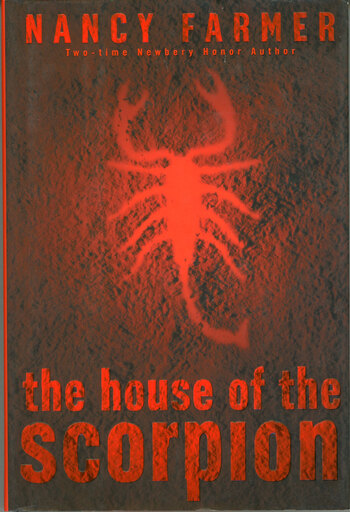 "Here's the dirty little secret. No one can tell the difference between a clone and a human. That's because there isn't any difference. The idea of clones being inferior is a filthy lie."
— Tam Lin
Advertisement:

The House of the Scorpion is a 2002 novel by Nancy Farmer. It takes place in the 22nd century, where a thin strip of land between the now-impoverished United States and Aztlán (formerly Mexico) forms the country of Opium. The story's focus is on boy named Matt, who is a clone of drug lord and ruler of Opium, Matteo Alacrán, the latter of which is more commonly known as El Patrón. As a young boy, he lives with Celia, his caregiver, in a little cottage in the middle of the poppy fields. Later, he moves in with El Patrón, but is mistreated by the residents (save a few of the characters, such as the bodyguard Tam Lin, and El Patrón) for the simple reason that he is a clone; most clones have their self-awareness and intelligence blunted by mandated drug use.

While living in El Patrón's mansion, Matt gradually learns more about the history of Opium, and also the history of people he lives with. His experiences in Opium instill in him the desire to make it a better place once he becomes the new ruler. However, when circumstances lead Matt to discover that he was never meant to inherit El Patrón's position, he escapes Opium with the help of Tam Lin and discovers that the world outside is no different than the one he had left behind.

The book was the winner of thirteen different awards, including the Newberry Honor and the National Book Award.

A film adaptation was mentioned at IMDb several years ago, but the project was never realised because the producers wished to make their own sequel and merchandise. Farmer felt this would lessen the themes of her story, so an agreement was never reached. However, Farmer has stated that she is still open towards offers for a film.

The sequel is titled The Lord of Opium and was released on September 3, 2013.

The House of the Scorpion provides examples of: