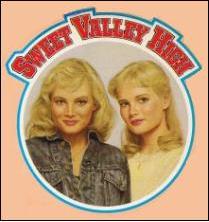 Look right down any crowded hall
You'll see there's a beauty standing
Is she really everywhere
Or a reflection?
One always calls out to you
The other's shy and quiet
Could there be two different girls...
Who look the same at...
SWEET VALLEY, SWEET VALLEY HIGH...
— TV series opening theme
Advertisement:

Book series running from 1983 to 2003, created by Francine Pascal. Spawned a TV series made by Saban Entertainment, several Spin-Off book series, a board game and other merchandise. Almost 200 books were published in the main series alone; over 600 were published including the spinoff series. Stories were handed off to ghost writers and generally hit bookstores once a month.

The series centers on Elizabeth and Jessica Wakefield, identical twins living in Sweet Valley, California. Elizabeth is serious, studious and levelheaded. Jessica is flirtatious and free-spirited; often her zany schemes drive the plot.

Until book #95, plots alternated between two types. In some, the main plot focused on the twins. In others, the focus was on another student at Sweet Valley High School, with a subplot devoted to the twins. In some of the latter type, Elizabeth Wakefield helped the focus character with some personal problem. Social issues such as racism, anorexia, and drug abuse were addressed in this manner.

Beginning with book #95, the series' format shifted. Books were grouped into miniseries, usually of three books, based on a theme. The first such series, which spanned seven books, was about a sociopath named Margo, who happened to look just like the twins, traveling to Sweet Valley intent on assuming Elizabeth's identity. (This Evil Twin later turned out to have an Evil Twin of her own.) With the shift in format, the storylines became increasingly fantastic, some dealing with such topics as werewolves and vampires.

In addition to the standard, numbered books, special editions included:

Series in The 'Verse included:

These book series provide examples of: