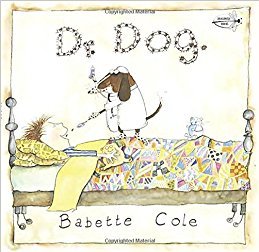 His owners taught him to heel, he taught himself to heal.
This is the Gumboyle family and this is their dog. He is a doctor.
Dr. Dog is a children's book by Babette Cole. It's actually two books.
Advertisement:

In the first book, Dr. Dog, the readers are introduced to a family called the Gumboyles (a mother, a father, a granddad and five kids: Kurt who's a teen, Fiona, Gerty and Kev who are grade schoolers, and Baby who is a toddler) and their dog, who is a doctor. When the dog goes away on a conference, Granddad and the kids each get various problems (Granddad has a gas problem, Kurt has Smoker's Cough, Fiona has earache, Gerty has tonsillitis, Kev has lice and Baby has intestinal worms) and they send Dr Dog to treat them, and he does, all the while giving a well-meaning, but somewhat naggy explanation of the causes and preventatives for each ailment, and treating them. It ends with Dog chewing the parents out for not bothering to prevent the family from getting sick, and then Granddad farts so hard he blows the roof off, leading to Dr Dog being sent to an island because he has too much "stress", but then he gets a letter saying the family is coming.

In the book's sequel, A Dose of Dr. Dog, Dr. Dog has met another dog who's a professor and the Gumboyles arrive and have their usual bad luck again (Kurt gets mosquito bites, Gerty gets motion sickness and Kev gets a boil on his bottom), and both doctors do their usual diagnoses, descriptions and treatments. Then, a carnivorous plant called a Nosenip nearly eats Baby, but Kev's boil bursts on it, saving the day.