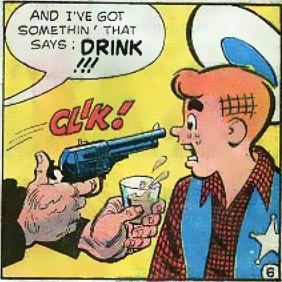 Not much of a choice.
"You might remember that these naggy junkies were a common theme in all anti-drug education of the time. It would have saved a lot of film if someone told educators that teaching children how to avoid getting expensive drugs for free is like teaching children how to escape from unicorns with a bag of magical shrieking peanuts. I can't remember ever saying, 'Fine, mister, I'll have some of your free heroin if you just get off my back.'"
— Seanbaby
Advertisement:

A trope of yesteryear, born from The '80s' DARE programs and resulting commercials, "inspirational films," and very special episodes. The Aggressive Drug Dealer is out there trying to force your kids into doing drugs. He won't take casual avoidance for an answer and will seek out and use intimidation just to coerce his target. So a type of training is required to "Just Say No."

This just isn't how it happens. No drug dealer in their right mind would risk attracting attention to themselves that way, especially not in the middle-class environments these commercials are aimed at. Any who do so will get caught very quickly, and be far less likely to actually get any customers. The same way children are more likely to be abducted/molested by someone already in their lives than a stranger, they're far more likely to do drugs with their peers than some shadowy figure lurking in the playground. Most drug users have their first taste at a party or some other social setting where the substance is being shared and they give it a try. From there, if they want more, they'll seek out the dealer themselves. Furthermore, it must also be noted that despite (and several would argue because of) government policy, the market for illegal drugs was and remains quite healthy throughout the world; the Aggressive Drug Dealer has little reason to waste time trying to bully unwilling people into becoming their customers when there are almost certainly lots more willing customers eager to buy their product.

So while the "just say no" narrative would make perfect sense in a social setting, where there might actually be pressure to take them in order to look "cool" to one's peers, the problem was, an anti-peer pressure approach to PSAs would wind up contradicting the prevailing theory held by Moral Guardians at the time: that deviant behavior arose from anti-social tendencies, and since surely such "bad kids" are a shunned minority, bowing to peer pressure must if anything be a good thing! Not only that, any such PSAs would also break the illusion any child might have had that their parents are a bastion of safety and morality. In the strict household hierarchy of yesteryear, that last point in particular was a no-no.

The only option left, then, was to fabricate this villain. "Talking to your kids" by scaring them with this nightmare was a lot easier than trying to understand the social environment one's child was in, and instilling values that would stand up and that parents agreed with. It's much easier to demonize an evil outsider inexplicably hell-bent on getting Little Johnny hooked to drugs than to talk about the fact that the people who are actually likely to be encouraging him to try will be his friends and peers.

Thankfully, most anti-drug PSAs have been taking a different approach in the last few years: encouraging children to be "above the influence" in all respects toward peer pressure, not just in regard to doing drugs. If your friends go get high after school, you don't have to go with them, and they'll just agree to see you tomorrow instead.

In this day and age, if a drug dealer is represented as "aggressive" in media, he will most probably be of the "shoot it out with the police and anybody who pisses him off" variety instead... who are, quite unfortunately, Truth in Television and have always been (e.g. Pablo Escobar etc). Although even that can be exaggerated, as many drug dealers prefer to live, obviously — something that kind of behavior doesn't really encourage (if this happens, they're usually cornered like Escobar, preferring death over prison, or high themselves-possibly on their own drug).

A subtrope of Drugs Are Bad.

Fetch gets drugged by Shane and leaves her to the DUPs.

Fetch gets drugged by Shane and leaves her to the DUPs.