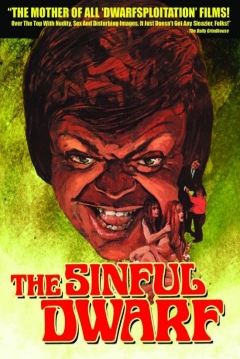 Some people say he looks like Jack Black.
Advertisement:

The Sinful Dwarf (1973) (original title: Dværgen) is a Danish exploitation film, sometimes referred to as part of a subgenre called "Dwarfsploitation". This particularly nasty piece of cinematic trash was reviled in its own time, playing to only a few thousand people in its native land and flat-out banned in Sweden. At this point, it is sought out by fans of Euro-sleaze cinema for its completely over-the-top nature. It does have some plot elements in common with Thriller: A Cruel Picture and Bloodsucking Freaks, if that's any indication of its content.

The movie centers around a boarding house run by a sleazy vaudevillian landlady, Lila Lash, and her incredibly creepy son, a flannel-wearing, toy-collecting, always-grinning little person named Olaf. The two of them use their attic space to imprison several young women, whom they control through heroin addiction and sell as prostitutes. Fair warning: there are scenes involving these women that are quite explicit, particularly in the uncut version of the film.

The movie begins by introducting Peter and Mary, a young couple who have their share of financial struggles, and must find a place to live within their means. Despite the disturbing nature of Lila and Olaf, the couple decides to rent a room in their boarding house. While Peter goes out in search of work, Mary stays home and tries to ignore the constant piano-playing and singing that takes place between Lila, her drunken friend, and Olaf. Even worse, whenever she's changing clothes or making love to Peter, a nasty little man is watching...

Has nothing to do with Tyrion Lannister.