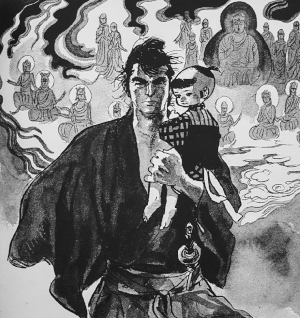 The trials of single fatherhood.
"Assassin, Lone Wolf and Cub! I come for YOU!"
Advertisement:

Lone Wolf and Cub (Kozure Ōkami) is an iconic manga created by Kazuo Koike and Goseki Kojima, describing the adventures of Ogami Ittō, former executioner for the Shogun, and his son Daigorō. Ittō, after being framed for treason against the Shogunate by the Yagyū clan, faced a choice between death and dishonor. Instead, Ittō Took A Third Option: abandon bushidō to follow "Meifumado" - roughly, either "the way of the demon" or "the road to hell". He would become a Rōnin assassin, Walking the Earth while planning his vengeance. And his son Daigorō, due to a Secret Test of Character from his father, now follows the same bloody road.

The original manga was published from 1970 to 1976. The series has been adapted into several movies and two live-action TV series in Japan. An English-dubbed Re-Cut comprised of the first two movies was released in 1980 as Shogun Assassin. AnimEigo has released both subtitled and dubbed Vanilla Edition versions of the films and The Criterion Collection has put out a Limited Special Collector's Ultimate Edition subtitled box set of the films. A sequel called Shin Kozure Ōkami, written by Koike with Hideki Mori doing the art (since Goseki Kojima died in 2000), ran for eleven volumes in Japan; Dark Horse Comics began publishing the English localization in 2014, under the title of New Lone Wolf and Cub.

There is also a spinoff series, Samurai Executioner, focusing on Yamada Asaemon, the Shogun's sword-tester.

Lone Wolf also inspired the American comic Road to Perdition, which changed the setting to 1930s Illinois and aged up the son to a pre-teen. Road to Perdition was later made into a movie starring Tom Hanks.