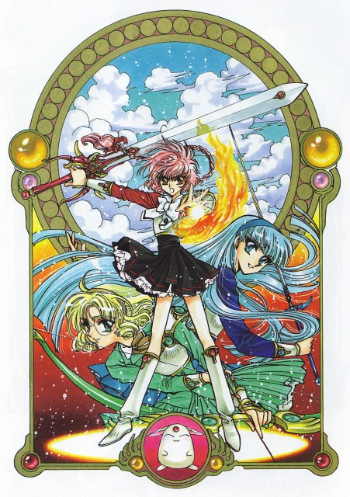 Tomaaaaaranai!/Hold on to that dream!
Mirai wo mezashite.../Tomorrow knows where and when...
Advertisement:

This Shoujo series is one of the most popular creations of the creative collective known as CLAMP, blending Magical Girl, Humongous Mecha and Heroic Fantasy into a unique and entertaining mix. It was also the first of CLAMP's works to receive an full anime adaptation.

Three schoolgirls—the boisterous Hikaru Shidou, the graceful Umi Ryuuzaki, and the bookish Fuu Hououji—are visiting Tokyo Tower on a class trip when they are suddenly whisked away to the magical land of Cephiro. There, they discover that they have been summoned to become Magic Knights and go on a grand quest to save Princess Emeraude, whose prayers sustain the peace of Cephiro, from the clutches of High Priest Zagato.

In the grand tradition of Eastern RPGs, the trio must travel across the land seeking out key characters to acquire their weapons, armour, upgrades and Summon Magic. Over the course of their journey, the three strangers gradually learn about each other and forge a true bond of friendship; a bond that is sorely tested as they approach the climax of the ancient prophecy and discover their true purpose as Magic Knights.

Magic Knight Rayearth, despite its deceptively simple "schoolgirls on a quest" appearance, is a story with layers of motivation and Backstory behind the events of Cephiro's crisis. What seems at first to be a simple, straight-line adventure/quest plot turns out to be darker and far more complicated, and the final revelation of the prophecy's true meaning forces Hikaru, Umi and Fuu to make mature, grown-up choices that belie the earlier impression of "fairytale fun".

The first half of the manga ran from 1993 to 1995 in Nakayoshi. The manga would later receive a sequel that ran from 1995 to 1996, which deals primarily with the aftermath of the Magic Knights' action in the first half. The anime, directed by Toshiki Hirano note at the time of this series' production, he was going by his real name, Toshihiro Hirano, but later started going by his current stage name and produced by TMS Entertainment and airing from 1994 to 1995 on Nippon Television, is split into two seasons, with the second season deviating more from the manga than the first.

Other media include Rayearth OVA, a Super Famicom game and two Game Boy games developed by Tomy, and a Sega Saturn version also developed by Sega and released in the United States by Working Designs. The latter version is noteworthy not so much for the actual game, but for the Development Hell that it went through - it was delayed for so long that it ended up as the final title ever released for the Saturn in the U.S. In 2019, it would become the first Magical Girl/Shōjo series to embrace the Super Robot Wars series (that isn't Super Robot Wars X-Ω) via Super Robot Wars T.