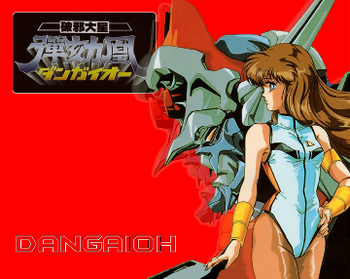 Dangaiou - Hyper Combat Unit (破邪大星ダンガイオー or 破邪大星弾劾凰, Haja Taisei Dangaiō) is an anime OVA series produced by AIC studios and released in Japan in 1987. Dangaioh featured character designs by creator Toshiki Hirano note at the time of this series' production, he was going by his real name, Toshihiro Hirano, but later started going by his current stage name, mechanical designs by Shoji Kawamori, animation direction by Masami Obari, and key animation by Hideaki Annonote Along with Obari and Kawamori, among others. A sort-of sequel named Great Dangaiou (破邪巨星Gダンガイオー, Haja Kyosei Gureito Dangaiō) ran in 2001, but was a flop.

It starts when a young girl named Mia Alice wakes up all of a sudden in a spaceship, frightened and confused and with her memories erased. A strange voice tells her that she's been abducted and transformed into a cyborg, due to her extremely strong Psychic Powers; soon she and other people in her same situation will be sold out as cyber soldiers to the highest bidder, alongside the Super Robot Dangaiou.

Mia, however, only wants to go back home. She also has a vague hint of who she truly is... she remembers having been a Ordinary High-School Student in Tokyo. Soon she meets up with the other three potential Dangaioh pilots: former La Résistance member Roll Kuran, Hot-Blooded Pai Thunder, and Naïve Everygirl Lamda Nom. The four decide to team up and see what they can do to recover their freedom and fight their common enemy: their potential employer, Captain Garimoth....