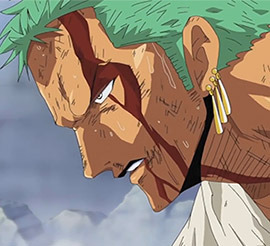 And yet, he can still see with both eyes.
Advertisement:

In any prolonged battle in manga and anime, usually one that has cuts to other scenes in the middle, you can expect to find the combatants bleeding from one or several of these places, with the probability and quantity increasing with time:

Works featuring bladed weapons often add a fifth: These are the Standard Bleeding Spots. In Shounen series in particular, the universe seems to be almost intent on inflicting just these wounds and nothing more: Internal bleeding can be cured afterwards with bandaging like anything else, direct trauma to the head is never accompanied with a concussion, and cutting and piercing weapons always miss by just enough to nick the hero and not leave a horrible, spurting gash.

In addition to these wounds, characters may also start spontaneously bleeding from their closed fists as a display of their own power.

Related to First Blood, Blood from the Mouth. Note that Standard Bleeding Spots do not necessarily entail defeat—indeed, many a shounen hero has just stood up after sustaining each and every one of them and proceeded to completely trash the antagonist.