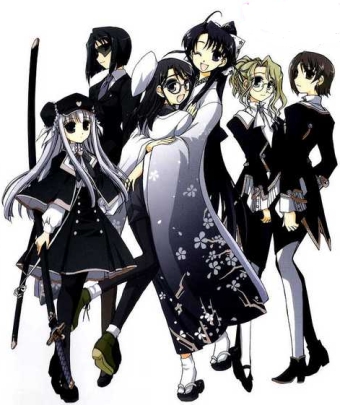 One day, a young girl named Eto Hachibe finds herself pursued by a strange woman in a kimono who asks her to become her "Sobame" (basically, a traditional concubine). Eto is reluctant at first; but eventually, she finds herself swept off her feet by this woman, who turns out to be the queen of a small European nation.

Eto then meets the rest of the sobames, and a series of wacky hijinks ensue.

Iono the Fanatics is a short, two-volume Girls' Love manga by Miyabi Fujieda, who is also known for The Miko's Words and the Witch's Incantations. It ran in Dengeki Teioh from 2004 to 2006. The author made clear that he was going for a lighthearted yuri romp with this story, and it very much is. The first volume has been published by Infinity Studios, but the second volume is currently in limbo (since Infinity Studios doesn't have an active website anymore, however, it can be assumed volume 2 will never officially see daylight.

Iono the Fanatics contains examples of: