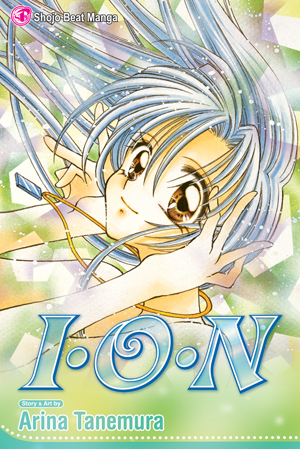 I.O.N is a Science Fiction Shoujo manga by Arina Tanemura, and her first volume-length work.

Once when she was a little girl, Ion Tsuburagi learned that by chanting the letters of her name, she could make miracles occur. Now in high school, she is a simple and cheerful girl who has a Stalker with a Crush, Kouki, who is also the student council president. She gets a big crush on Mikado Hourai, a boy who's been researching psychic powers and runs a school club on the subject. When Ion sneaks into the shed where Mikado keeps his experiments, she touches a blue stone and gains the powers of telekinesis and levitation.

Soon afterward, Mikado's ex-girlfriend Ai transfers into their school, and she also has psychic powers. Mikado is unsure of his feelings toward Ion, and both wonder whether he likes her romantically or as just another experiment. Who will Mikado choose, and why does Mikado only seem to like Ion when she begins losing her powers?

Originally serialized in Ribon from June to November 1997, it made BookScan's list of top 20 graphic novels for the year 2008. It has been released in Germany, Spain and America by Viz Media.