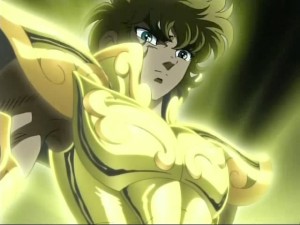 Power glows. The more power, the more glow. So, anything that glows is automatically presumed to be superior to otherwise identical things that don't glow, and more glow is better. This is closely related to the Rule of Cool because glowing is cool, so things that glow automatically get more Willing Suspension of Disbelief, allowing them to be more unrealistically powerful. They're often Good Colors, Evil Colors, too. For example, evil glows bright red, good glows blue or gold, and radioactive materials glow green.

Glowing Eyes of Doom? Inherently superior to ordinary, everyday, garden-variety eyes of doom. Glowing Battle Aura? Opponents who don't glow won't stand a chance! Any physical object that glows will also be powerful somehow. Glowing sword vs. boring sword? Glowing sword wins, every time. Explodey things that emit a glow first are bigger, louder and/or do more damage, and if they were Sucking-In Lines first, they're even more so. The most powerful magical potions will also glow to signify their superiority over ordinary, non-glowing magical potions. And don't forget the inherent awesomeness of the Pillar of Light, which is Glow going to Heaven just to show how overwhelming it is.

Strangely enough, in real life glowing would usually indicate a wasting of energy, but it could still count as just the excess energy manifesting as light. A good example is in Mercedes Lackey's Velgarth series in which Gates and Portals only glow when energy is being used inefficiently.

If only certain people are aware of the glow you could be looking at Editorial Synaesthesia or even Aura Vision. May be used as a Fantastic Light Source as Mundane Utility.

As one final note, DO NOT rely on this trope to determine danger in Real Life. People have been killed from touching downed power lines that aren't glowing or sparking but still have enough charge to electrocute anyone who touches them, and permanently disabling to lethal levels of radiation can be present without any visual signs at all (which is why Geiger counters and dosimeters exist!)

Bruce Leroy Gets the Glow

Bruce Leroy Gets the Glow