Film / The Hobbit: The Desolation of Smaug 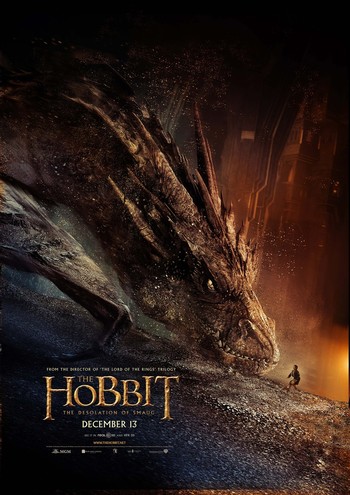 ''"And the bells shall ring in gladness, at the Mountain King's return. But all shall fail in sadness, and the Lake will shine and burn."
"King? There is no king under the mountain nor will there ever be. None would dare enter Erebor, whilst the dragon lives."
— Legolas
Advertisement:

The Hobbit: The Desolation of Smaug is the second film in the three-part cinematic adaptation of J.R.R Tolkien's classic fantasy novel The Hobbit, directed by Peter Jackson and adapted for the screen by Jackson and Guillermo del Toro. It was released in December 2013.

Picking up where the first film left off, we find the company running from Azog, who has nearly caught up again after the eagles came to their rescue. They seek refuge in the home of the skin-changer Beorn, then take off towards the forest of Mirkwood. Gandalf is forced to part ways with them to investigate the supposed Necromancer, and without him they encounter one obstacle after another, including spiders, elves, orcs and men. And as the Lonely Mountain looms closer, so does the threat of their greatest enemy — the dragon Smaug.

Followed by The Battle of the Five Armies.

The Desolation of Smaug provides examples of:

open/close all folders
Tropes A to L
Tropes M to Z
♫ If this is to end in fire
Then we should all burn together
Watch the flames climb high
Into the night... ♫
Feedback

Smaug boasts to Thorn Oakenshield about how his efforts to reclaim the gold he stole from the dwarves are futile.

Alternative Title(s): The Desolation Of Smaug

Smaug boasts to Thorn Oakenshield about how his efforts to reclaim the gold he stole from the dwarves are futile.