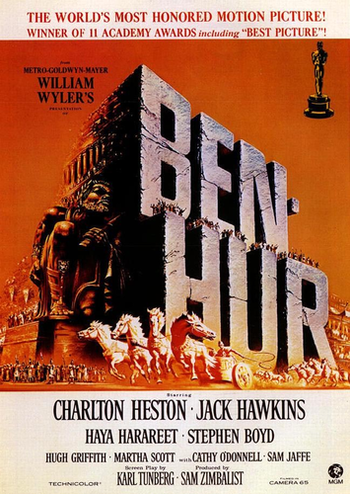 The poster art alone is freakin' epic!
Don Wilson: Orson, what's the title of this picture you're making?
Orson Welles: Well, I've called my story very simply The March of Destiny, and it deals with everything that ever happened. From the beginning of creation to the present day.
— The Jack Benny Program, March 21, 1943
Advertisement:

5 years in the making! 3-and-a-half hours long! Two intermissions! $350,000,000 budget! 50,000 cast members! All-Star Cast! A+ list actors! Oscar Bait to the core! Coming soon to an IMAX theater near you! Can't even be described by sentences that don't end in an exclamation mark!

Epic Movies are movie movies. These movies are what make Hollywood Hollywood. These movies are so big they need bold italic emphasis. These movies are what we think of when we think of the stars getting out of limousines to walk down red carpets while being shot by the paparazzi and entering rooms with grand staircases and lit by chandeliers.The scope of these Greatest Stories Ever Filmed and the amount of time and money invested in them means that only one comes along every few years. If they were books, they'd be Doorstoppers (especially if they're adapted from books that are Doorstoppers).

In short, the direct inversion of the B-Movie.

Often, these movies are somewhat hammy and contrived. But that's precisely why they're so successful and why one enjoys watching them. They evoke the feeling of reading one of the aforementioned great novels of our time. They are representations of quintessential human fantasies and fables. Such movies are usually darlings of critics and audiences alike. However, if things get too hammy, the movie crosses over the line from charming to silly, and critical reception of them can be lukewarm at best and scathing at worst (such was to be the fate of the ambitious but ineptly executed Cleopatra - and even modern films like Gods of Egypt).

An Epic Movie should have a) dramatic ambitions of some sort and b) epic scope. If a movie is artistically ambitious, but focuses on a small number of characters, it probably isn't an Epic Movie. Exceptions are rare: Das Boot and 2001: A Space Odyssey are possible examples of films with a claustrophobic setting that are epic in scope.

Not to be confused with a Summer Blockbuster. While superficially similar, that is a separate and distinct offshoot often playing in the same genres. Though it might have a similarly huge budget and scale, it usually isn't as plot-heavy or artistically ambitious. A good way to think of this type of film would be "Summer Blockbuster meets Oscar Bait."

Not all Oscar Bait is this: A period drama may count, if it involves a war at some point, but probably not a dark drama about the mind of a killer or three generations of people living in a house. Generally speaking, a Disaster Movie or Giant Monster film is a type of Summer Blockbuster that is not described as "An Epic". It may be "epic" in the Totally Radical sense, or an "event movie" due to visuals alone — terms which generally describe any Summer Blockbuster, but that is different. These are event films by definition, due to subject matter that merely demands such treatment. Epicosity must ensue, so the list is necessarily limited.

Epic movies tend to be character oriented as opposed to simply plot oriented. This does not necessarily mean that these movies are Talking Heads sleep inducers. Rather, it means that these epics follow a central main character, often amidst a backdrop of a larger event that you often get glimpses of. Indeed, epic films often have very impressive action scenes as that tends to be the reason that these films are big budget in the first place. Additionally, unlike smaller scope films, the central main character is not necessarily the only viewpoint character. Therefore, viewers often follow the development of multiple characters. These are stories with a beginning, middle, and end and the story ends when the character's role ends, not when the big background event ends, even if we know that there's more to that event than what was shown in the film (such as an ongoing Great War). Therefore, unlike the Summer Blockbuster, true epics, with few exceptions, tend to be stand-alone works that do not credibly lend themselves to sequels, prequels, or the beginning of franchises. Indeed, many attempts to further capitalize on the original story with follow up installments, frequently meet with critical panning.

The music composed for the soundtrack of epics were frequently as memorable as the films themselves. Prolific epic composers include Miklós Rózsa, Jerry Goldsmith, John Williams, Elmer Bernstein, Leonard Rosenmann, Alex North, and James Horner. Sweeping orchestral pieces have always been de rigueur for epics.

Particularly long epic movies often had overtures, intermissions, and entr'actes. This was clearly borrowed from the tradition of theatre, especially opera. It gave the impression that these films indeed were special events. These are typically edited out for TV broadcast or pre-DVD home video. This practice was especially prolific during The '60s, the golden age of international epic films, but it didn't last long after 1970. It is certainly not in current use today due to the fact that ads and trailers already delay the start of a film by almost a half hour. Also, this practice denotes a deliberate, slow paced film, something that is clearly out of fashion among current audiences.

These tend to come in waves, egged on by some new technology made for use in the home that makes the studios feel the go-see-a-movie-in-a-theater business model is threatened. Radio in the '30s, TV in the '50s and home video in the late '70s/early'80s all sparked waves of Epic Movies, and now it's digital streaming's turn.

For Bollywood movies, the Epic Movie is the rule, not the exception. Three hours is about average length for a Hindi-language movie, and they draw significant inspiration from American movies of this genre, the many religious traditions of India, and the great narrative epics such as the Ramayana.

Not the same thing as a Big Damn Movie, which is an adaptation that ups the stakes for the characters from an existing show. Also, not necessarily an Epic that happens to be a Movie, although a lot of the time an Epic Movie is an Epic. Also not to be confused with the Seltzer and Friedberg movie of the same name.

Some Mini Series fit the bill due to their casts, length, drama and high production values.