Film / The Hobbit: The Battle of the Five Armies 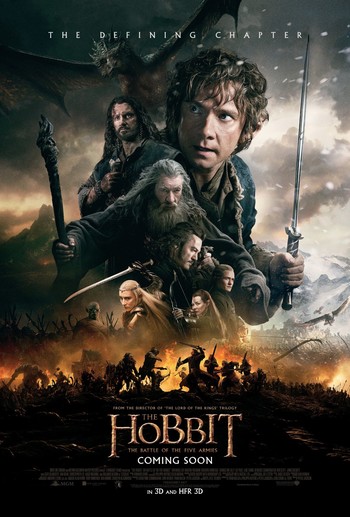 "I have no right to ask this of any of you... but will you follow me... one last time?"
"You're a very fine person, Mr. Baggins. And I'm very fond of you. But you're only quite a little fellow... in a wide world after all."
— Gandalf the Grey
Advertisement:

The Hobbit: The Battle of the Five Armies is the third and final film in the three-part cinematic adaptation of J.R.R Tolkien's classic fantasy novel The Hobbit, directed by Peter Jackson and adapted for the screen by Jackson, Fran Walsh and Philippa Boyens. It was released in December 2014.

Beginning immediately where the prior film ended, the Dragon Smaug unleashes his wrath on Laketown, Gandalf remains a prisoner in Dol Guldur, and the Necromancer's forces prepare for a war to wipe out the free peoples of Middle-Earth once and for all. Amongst the chaos and flames of war, friendships will be tested, hearts corrupted, and the forces of good must overcome their distrust of one another and unite if they are to save Middle-Earth from the ultimate evil.

Battle of the Five Armies is also the final film for both Christopher Lee and Ian Holm before they died in June 2015 and June 2020, respectively.

The Battle of the Five Armies provides examples of:

open/close all folders
Tropes A to D
Tropes E to M
Tropes N to Z
Advertisement:
♫ I bid you all a very fond farewell... ♫