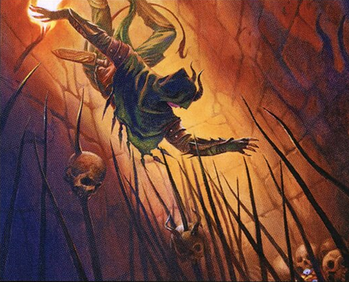 There's getting your point across, and then...
"It's a spike pit! And if you're even slightly off side... FATALITY"
— Play It Bogart on Rollergames

The funny thing about spikes is that they're surprisingly plentiful. But where do you expect to find them?

On the floor. On the walls. On the walls that are closing in on you. On the Descending Ceiling. On the Smashing Hallway Traps of Doom. All sharp enough to impale you and leave you a bloody, shish-kabob'd hero (or at least take off a Hit Point or two…).

Appearing in more games than the barrel and the crate combined, the classic deadly spikes might just be the most widely-used videogame object ever. (It should also be noted that while crates and barrels are everyday items that most people see throughout their day, you'd have to search really hard to see a real-life death trap made of spikes.)

Commonly used as an alternative to the Bottomless Pit, a floor covered with spikes spells certain doom for the platform-jumping hero — that is, unless you've got an Invincibility Power-Up or are allowed Mercy Invincibility. They can be used in other places besides floors — as videogame design throughout the ages has shown, you can put spikes anywhere to spell the simple message "touch me and die!"

Spikes often take on more natural appearances, such as stalagmites and stalactites in a cave environment, icicles in Slippy-Slidey Ice World, or teeth in a Womb Level.

Spikes, for some reason, are typically deadly from both above and from the side. That's right, you can kill yourself by walking into the side of a triangle. A few Platform Games make it harmless to walk through spikes, though falling on or jumping onto them remains entirely lethal.

Spikes have a strange tendency to repeatedly retract into the ground and then come back out again, forming a sort of Temporary Platform.

Spikes also have a strange tendency to become disconnected from the wall or ceiling and come try to kill you. Enemies with spikes on their bodies can often throw them at you and regenerate them at will.

Most video game enemies are completely immune to the pointy tips on the spikes. If they walk into them, they'll just turn around and go the other direction. If they step onto a floor of spikes, just keep walking as if nothing's wrong. Many times, the hero will even need to jump on their head and ride them across the floor in order to survive.

Often, spikes will damage or kill the player even when in Real Life situations, spikes aren't that sharp. Often spikes have a nasty tendency to kill even when you're not touching the tips of them.

A classic, staple Death Trap and obligatory part of every Death Course. Obviously, they aren't just limited to videogames, but that's where they're most known.

Spikes of Doom are very frequently found affixed to an Advancing Wall of Doom.

See also Impaled with Extreme Prejudice and Inertial Impalement. Also see Spike Balls of Doom for a spherical version, and Studded Shell when used as a Natural Weapon. Not to be confused with Spikes of Villainy.

The Earth section of Sea Tower has spikes that can injure Mario.

The Earth section of Sea Tower has spikes that can injure Mario.