Video Game / Tobari and the Night of the Curious Moon 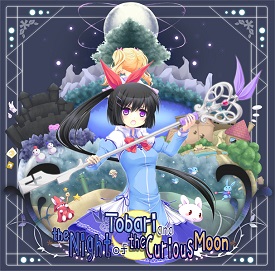 It was a late autumn night when a pale light descended from the night sky that only a scent few have noticed. The following morning, Tobari, the chief hall monitor of her school, arrived to the school's preparation of their culture festival to find her friend, Hina, not wearing her school uniform. Later that afternoon, many students gathered and the sky suddenly grew dark and dusk-like, like something out of a fairy tale as time leapt forward. Amidst the chaos, Hina began to act strangely and head away from the school. With that, Tobari began her adventure on the night of the curious moon.
Advertisement:

Tobari and the Night of the Curious Moon, also known as Fushigi na Tsuki no Yoru no Tobari, is a platforming game by Desunoya. If you were to take Super Mario Bros. and blend it with Kirby with a touch of Moe, your result would likely be this doujin platformer; the gameplay is reminiscent to Super Mario Bros. yet our heroine Tobari can use the magical powers of her enemies by whacking them with her Keystaff.

The game was first released in Japan (obviously) during Comiket 81 for Windows PC, and later received an official English release on DLsite's English website; the localization credits includes Mauve, a programer of Gensokyo.org

who also worked on the Fan Translation of some of the Touhou Project games and HELLSINKER. You can find the English version on DLsite here

. The overseas version later made its way onto Steam on May 26, 2015 for Windows and Linux. The game's English webpage and its trial version can also be found here