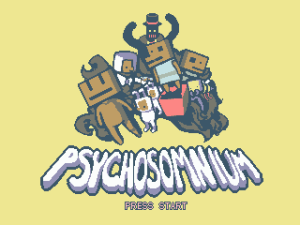 Nap time.
A Platform Game by cactus... so you already know it's gonna be weird. Though it's much MUCH Lighter and Softer than his other games, like Norrland or Hotline Miami.
Advertisement:

Psychosomnium is a short, quite surreal story, telling the story of Jimmy, or rather, Jimmy's dream and the people who inhabit it, struggling with a mysterious unexplained problem.

Basically, it's your typical cute dream in video game form. It can be played online here