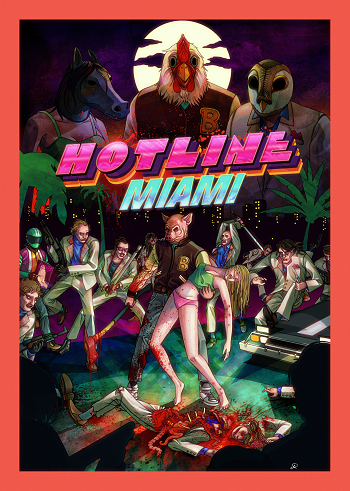 You have - one - new message!
Hi, it's Eddie, from Fast TV Triage. We've got a few "natter problems" at the intersection on Street Smart and Street Urchin, and the moderators are busy at the moment. Can you please come and "edit" the offending pages? And as always...

You wake up in the bathroom of a dingy apartment. The lights are out, and an oppressive atmosphere fills the air. You step out and are greeted by a trio of masked figures who begin to ask questions you don't know the answers to. The woman in the horse mask is concerned for you, and the man in the owl mask hates you - but only the man in the chicken mask knows who you are, and why you're here.

It is the spring of 1989. Tensions between the US and Russia are at an all-time high in the wake of the "Russo-American Coalition," and The Mafiya has cemented itself as the most powerful organized crime ring in Miami. You don't get out much, and your only friend is a guy with a beard who works at the grocery store.* Or was it the bar? The video store? The pizza place? You can't recall. One day, you receive a strange message on your answering machine telling you that your order of baking ingredients has arrived, and that you should follow the recipe carefully.

Problem is, you didn't order anything. The "ingredients" are rubber animal masks, the "recipe" a cryptic note instructing you to perform a hit on some Russian mobsters and await further orders on your answering machine, threatening consequences if you don't follow through. From then on, it's a downward spiral as you continue killing at the behest of the voicemails, struggling to stay sane and survive, all the while hoping that maybe - just maybe - you'll find out what the hell is going on.

Gameplay is simple - it is a top-down 2-D action game with movement by WASD and a few other buttons for killing. All you have to do is kill all enemies and not be killed, although this is easier said than done. Why? You die within one hit. And you will die plenty of times.

Following its release, the game received widespread acclaim, and was widely considered one of the best indie games of its time. It gained a substantial amount of attention from development company Overkill Software, makers of PAYDAY: The Heist and PAYDAY 2, whose love for Hotline has resulted in numerous Shout-Outs to it into the latter game. This culminated in a series of collaborations between Dennaton and Overkill, including a crossover heist featuring the Miami Mafiya and the appearance of Jacket as a Guest Fighter.

In 2015, a sequel, Hotline Miami 2: Wrong Number, was released, which serves as a pseudo-Mind Screwdriver to the first game's Jigsaw Puzzle Plot.