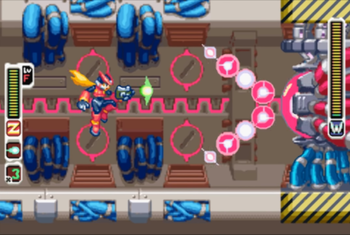 A Boss Battle where the boss remains in one place. In side scrolling games this typically means the left or right side of the screen, though in 3D games the distinction gets a lot blurrier.

It might be because the boss is too big to move and be a fair fight or because it's merged with something and can't move. In older games, large bosses were largely stationary due to sprite limit count (and having to use background tiles as an alternative) and difficulty to animate background tiles.

A boss that stands in the background and launches attacks into the foreground is a Background Boss. If the boss remains on one side of the screen and is edging ever closer requiring you to defeat him while running away he may also be an Advancing Boss of Doom.

Compare Pivotal Boss and Battleship Raid. Contrast High-Speed Battle. Not to be confused with a Stationery Boss who attacks you with memos, box files, pens, ink, staplers etc.

After Gooigi activates a switch to suck up the water, Deepend gets stuck in the drain and is stationary for the rest of the fight.

After Gooigi activates a switch to suck up the water, Deepend gets stuck in the drain and is stationary for the rest of the fight.