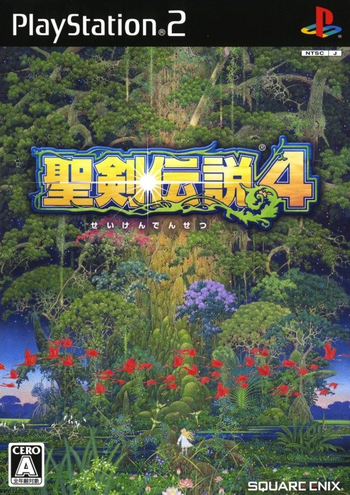 Dawn of Mana, known in Japan as Seiken Densetsu 4 (聖剣伝説4), is a Mana Prequel released in 2007 for the PlayStation 2. It follows the story of the orphan Keldric, his Unlucky Childhood Friend Ritzia, the destruction of his Doomed Hometown by The Evil Empire, and how all of this ties in with the awakening of the Mana Spirits and the Mana Tree.

Dawn of Mana plays like its Spiritual Predecessor Kingdom Hearts, but instead of gaining experience to level up, the hero has to earn badges before he can permanently upgrade his abilities. This mechanic, in addition to the frustratingly difficult boss battles and jumping puzzles, has made Dawn of Mana reviled by fans.

Tropes unique to this game: