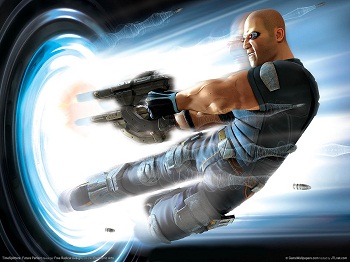 A time travelling, monkey-shooting Timespace Marine is you!
"It's time to split!"
—Sgt. Cortez
Advertisement:

In which universe can a player waltz about through time, sometimes masquerading as everything from an astronaut to a mobster to an explorer, wield P90s, laser beams, and blunderbusses, shooting up monkeys, gingerbread men, snowmen, gangsters, robots, lions, cowboys, and Russian soldiers?

TimeSplitters, that's which one.

If these games cause you to draw comparisons to the heralded Nintendo 64 first-person shooters GoldenEye and Perfect Dark, then that's expected. When Rare released the latter in mid-2000, much of the core team for both games left the studio: notably directors David Doak and Steven Ellis, artist Karl Hilton, and composer Graeme Norgate. Within a few months of Free Radical Design's founding, TimeSplitters was released for the then-brand new PlayStation 2, its release coinciding with the console's launch in Europe. This game would be followed up by two sequels: The second, releasing with critical and commercial acclaim in 2002, and Future Perfect in 2005, a game many consider to be the most polished out of the series in terms of mechanics, story, and customization options.

While the second and third installments introduced more complex levels and overarching objectives, the main premise of each level in a TimeSplitters game mostly remains the same: travel to a specific time period (ranging from 1930s Chicago to 1800s Old West to 2019 Neo-Tokyo and 2280 Planet X), apprehend the time-specific foes that dare cross your path, equip the then-latest in armaments, complete the objectives the game instructs you to do, and advance to the next stage. While the first game involved you simply stealing an item and returning to your spawn point (making the experience, for lack of a better word, glorified Capture The Flag with bots), 2 and Future Perfect introduced an overarching story, involving Vin Die—er, ''Sergeant Cortez'' collecting Time Crystals sought after by the series' titular TimeSplitters, a race bent on the erasing of human history as we know it.

While the story varies greatly among the three games, persistent features of the series include MapMaker, a simple grid-based level editor (predating Halo 3's Forge Mode by seven years); Multiplayer modes including the traditional Deathmatch and Capture the Flag-type games, as well as other more original options, and Challenge mode, consisting of sets of single player challenges. The challenges range from collecting bananas as a monkey to shooting cardboard cutouts, and monkeys. A considerable amount of monkeys.

As aforementioned, the games in the series include:

It's Time To Trope!: