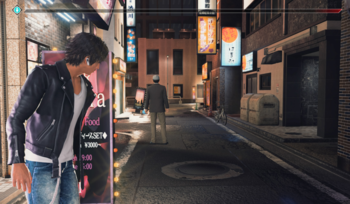 He doesn't suspect a thing…
Advertisement:

A gameplay segment in which the player is tasked with following an NPC to a designated area, either on foot or in a vehicle. However, there's a special provision: for one reason or another, your target can not be alerted to your presence, as this will cause them to panic and flee, resulting in mission failure. Some games provide a "suspicion meter" that reveals how close the target is from getting spooked, and which can be reduced if the player further distances themself.

You must avoid following them too closely as doing so will typically end the mission instantly. Sometimes, this makes no sense as your target would logically have no idea what the Player Character or their vehicle would look like and they are never the slightest bit suspicious of the NPC traffic all around them. But rest assured if you get close they will instantly know you're following them. On the other hand, feel free to be as obvious as you need to in your efforts to stay a safe distance away: stopping your car in the middle of the street while the target is waiting at a red light is apparently not suspicious at all as long as you're not too close.

In any case, you are required to follow them from a considerable distance, which may prove to be problematic in crowded areas or in intricate environments, especially if your target is unmarked and difficult to identify. On the other hand, no matter how easy it would be to find the target again, losing sight of them (or rather, getting too far from them) even for a short while will typically cause the mission to be declared a failure instantly. This also means that even if you already know the target's ultimate destination, you can't simply go there directly and wait for them. You must follow the target all the way.

Almost invariably a forced-stealth Unexpected Gameplay Change, the Stalking Mission is often viewed in a negative light for a variety of reasons. They may be lengthy and contain no Check Points, and if the target takes a difficult-to-follow route to their destination, it may be necessary to resort to trial-and-error. Finally, the target may walk painfully slow, jarring to players who are used to constantly running. This is even worse in driving variations, as the NPC will typically drive at a normal speed and obey traffic laws, something the player has hitherto been unbound by. Said traffic will sometimes flatten the target, resulting in mission failure.

See also Escort Mission, which may also involve tailing an NPC but for different reasons, Stealth Escort Mission when the target must remain unaware that he's in danger in the first place, and Assassination Sidequest if you need to follow your mark until they reached a designated location so you can kill them there. A subtrope of Stealth-Based Mission; the difference is which person, or rather how many people, whose detection you need to avoid.