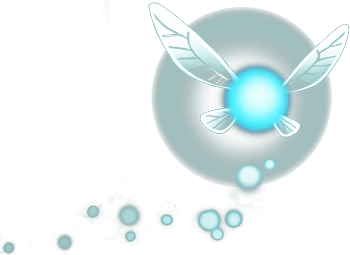 Often in fiction, fairy creatures, fireflies or other magical insects get depicted as simple little points of light rather than going for a full design for something so tiny we'll never get a good look at it.

The obvious inspiration is fireflies. It's funny how fireflies often end up behaving in unusual and rather magical ways. In a way, it's an example of the connection between light and magic.

Do not confuse with By the Lights of Their Eyes; this trope is about Energy Beings or Faceless Masses that may or may not sparkle. See also Will-o'-the-Wisp (point of light that leads unwary travelers into danger) and Hitodama Light (floating flame that represent ghosts).