Guardian of the Multiverse 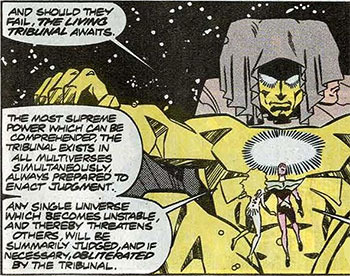 Our universe is not the only one. In fact, it's just one of countless Alternate Universes in The Multiverse. The Multiverse is so big and complicated, that it needs a being capable of watching over all of it.

Enter the Guardian of the Multiverse.

They prefer to be The Watcher, to observe and not interfere unless it's necessary. However, if your Evil Twin escapes their native universe bent on attacking yours, a Galactic Conqueror, Dimension Lord, or Omnicidal Maniac wants to break the barrier between realities, an Eldritch Abomination tries to spread its horror through the dimensions, or if two alternate worlds declare a war that threatens multiple realities, the Guardian Of The Multiverse will be the Deus ex Machina called upon to stop it. If changes in one world's history will endanger others, they will gather a team to Set Right What Once Went Wrong and become their Mission Control. And if a Multiversal Conqueror rises to enslave all worlds in all galaxies of all dimensions, the Guardian Of The Multiverse will gather an army needed to stop them (or be the very first person they kill, because of The Worf Effect).

They're often an Original Generation character in a Crisis Crossover, and may be pitted against a Crossover-Exclusive Villain. Likely to be the Big Good of a setting.

They are one of the two highest-ranking Authority Tropes, the other being Multiversal Conqueror. The next rank down is Dimension Lord.