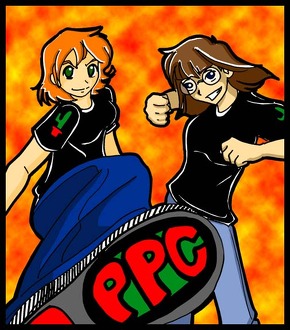 Somewhere in your favorite fandom, your most beloved characters and plot elements are being ruined right now. Everything that makes Captain Jack Sparrow funny is being dropped for the sake of bad romance. Snape suddenly washes his hair, grows angel wings and yet no one bats an eye. The four Pevensie siblings are having sex with each other, as spelling and grammar are murdered wholesale describing that brand new sports car that Legolas somehow owns.

You cry out in horror as to what has happened to the series that you know and love... but the Protectors of the Plot Continuum are on the case!

Established in the early 2000s, the Protectors of the Plot Continuum (often referred to as The PPC) was originally a single saga of adventures but has since grown into both a whole expanded universe as well as an open community dedicated to preserving canon in fandom, promoting good writing, supporting critical thinking and analysis in fanwork, and above all, having fun. Modern PPC material is released by many different authors and for many different fandoms. Because of the wide variety of PPC authors, the style of writing as well as personal tastes in the story run a gamut from literary-oriented criticism, to madcap zany fun, to downright raunchy humor.

Installments in the Protectors of the Plot Continuum canon can be considered metafictional Shared Universe Fan Fic-Web Original crossbreeds. It's a thoroughly tongue-in-cheek (barring certain more serious stories or spinoffs, which still have elements of the usual sense of humour) about an organisation of the same name whose purpose it is to tamper with fanfiction in order to bring it closer to the canon of the original work. Various departments kill Mary Sues, exorcise characters in Bad Slash stories, retrieve characters from bad AUs, untangle continuums in poorly-written crossovers, and do just about everything else that can be thought of. However, the organisation began with Sue assassinations, and is certainly most well-known for that.

Possession Sues, Bad Slash victims, and other OOC characters are exorcised back to their canon selves, but in the early stories, they could usually be fixed by simply removing Original Characters. Especially lucky or non-disruptive Original Characters may get recruited into the organisation - for those who defend the canons must have a dash of the extraordinary in them.

The Protectors go in pairs, as they are often fans of the canon and need help to stay objective, and also because their bosses (a group of alien flowers and plants - which does make sense according to the writers of the Protectors' adventures) specifically aim to create Odd Couples, which is supposed to improve mission performance. They are equipped for their tasks with a camouflage generator that hides them from canon characters (though not fan-created ones), the electronic ranged equivalent of a Mary Sue Litmus Test, and a device that measures how much canon characters have been distorted by the badfic in question.

There is also quite a bit of workplace humour (the headquarters is surreal, mostly due to being created by the aforementioned Plant Aliens), and explication of what sort of Sociopathic Hero a person has to be to do this necessary work. The Narrative Laws of Comedy (and others, such as the Ironic Overpower) all but govern life in HQ, enforced by the Legal department.

It's a setting where electronics tend to blow up at the first excuse or develop sentience if not properly maintained, everything Runs On Nonsensoleum and literal Plot Holes, the Ironic Overpower will strike down anyone that tempts fate, and puns are unavoidable. Training is inconsistent at best, ranging from Training from Hell to being given useless directions and surviving the first mission, equipment and pay can be charitably described as exactly minimal. Agents cause intentionally ironic deaths, Sue Soufflé is Made From Real Sues, and almost everyone wakes up the night after a party asking What Did I Do Last Night? Expect lampshades. Both types.

Unsurprisingly, the original series was inspired by Terry Pratchett and his works.

It is a community of writers and fanfiction lovers first, not bullies. Within the community it is heavily frowned upon to take a pot-shot at a fanfiction writer - it is unarguably poor fanfiction that is the subject of their ire, not the people who produce it.

with a helpful guide for newbies. HQ is here

. The Official Fanfiction University (and its spinoffs) share a multiverse with the PPC.

The Anti-Cliché and Mary-Sue Elimination Society is a rather similar, but distinct, organisation with its own canon and way of doing things. It is also far more dramatic for the most part. In general, the PPC can be said to have popularized the Mary-Sue Hunter concept.

This provides notable examples of the following: