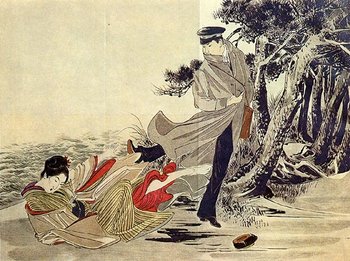 Admit it, you're most likely just reading it for this.
A.k.a. that book with a dude kicking a chick on the beach.
Advertisement:

Konjiki Yasha (金色夜叉), best known in the English-speaking world as The Golden Demon, is a romance novel by Kōyō Ozaki serially published on Yomiuri Shimbun newspaper from January 1, 1897 until May 11, 1902 when it was Cut Short when the author Died During Production in 1903. It tells the story of diligent orphan student Kan'ichi Hazama set to marry the beautiful Dude Magnet Miya Shigisawa, whose family is generous enough to let him live under their roof. The affection is mutual, though Miya also harbors a desire to marry someone well-off… then along comes Tadatsugu Tomiyama, a wealthy banker's son with a penchant for unabashed wealth-flaunting, whose riches get Miya's parents to break off her betrothal with Kan'ichi so she can marry him instead. This leads to a tearful breakup where a heartbroken Kan'ichi decides to put an end to his squeaky-clean diligent student path and renounce his humanity. Fast-forward 4 years later, the novel follows the exploits of Kan'ichi, now a ruthless Loan Shark, and Miya, now Miyako Tomiyama, who leads a miserable marriage with an abusive and unfaithful Tadatsugu, and the two's reunion…

One of the poster boys of Meiji literature, it's remembered as a sobering cautionary tale about the dangers of pursuing money over love or human connection… or just the book with the dude kicking the chick.

Trope lists may change, but money never does: