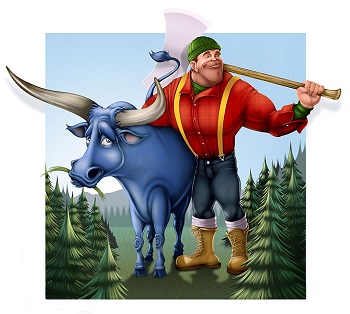 A figure of American folklore. Depending on who you ask, he might be seven feet tall with a stride of seven feet, or he might be so gigantic his beard has its own ecosystem.

A number of New England states claim to be the place of his birth (with Maine being the favored candidate), as do a few Canadian provinces. There's some room for compromise here; it's entirely possible that, even at the moment of his birth, he was big enough to need several states worth of land to stretch out in.

Folks in the Great Lakes area will tell you how he was a mighty lumberjack, who logged Michigan into the shape of a mitten because he had lost his own mitten in the snow, made Lake Superior cold by keeping his icebox at the bottom, and whose footprints filled up with water and became Minnesota's 10,000 lakes.

Nebraskans and Kansasites will tell you he's the reason they're covered by the Great Plains. First he cut down all their trees, then he flipped the states upside down, so all their hills were buried and nothing but flat land was left on top.

Californians will tell you their state's where he really hit his logging stride, at least as far as quality of wood is concerned, and on his way there created the Grand Canyon by dragging his axe on the ground for a bit.

Get down into Texas and Oklahoma, though, and they'll tell you lumberjacking was just his side venture; his real profession was drilling for oil, and that he built derricks so tall they had to be hinged at the top so they could let the sun and moon go by.

'Round Seattle, they'll tell you he was the one who dug out Puget Sound, and that he used all the dirt he dug up to make Mount Baker.

And get up into Alaska, and folks will tell you he's still there now, living out his retirement in the last wilderness America's got left.

His name's Paul Bunyan, and stories about him have gotten a little exaggerated.

He got his start as stories told among lumberjacks to amuse themselves in the late 19th and early 20th centuries. Whether there was ever an actual Paul Bunyan the stories are based on, and what similarity, if any, the surviving stories of him bear to the original logging camp yarns is a subject of much debate among folklorists.

The oldest surviving mention of him in print is an article James MacGillivray wrote for the Oscoda, Michigan newspaper in 1906, that related several anecdotes about Paul Bunyan and his logging crew. It reappeared in revised form in the Detroit News four years later under the title "The Round River Drive

". The Detroit News story was redone

in prose form for the American Lumberman in 1914. But Paul's big break didn't come until two years later, when he got into advertising!

Starting in 1916, ad man W.B. Laughead wrote some pamphlets for the Red River Lumber Company that used stories of Paul Bunyan to try and sell their product; these pamphlets are collectively known as The Marvelous Exploits of Paul Bunyan

. Laughead is credited with creating most of the commonly known Bunyan lore, including Babe the Blue Ox and the idea that Paul Bunyan was a giant.

As it so happened, while they weren't much good at improving lumber sales, these pamphlets proved immensely popular for their entertainment value. And, since advertisements are meant to be distributed as widely as possible, free of charge, the Red River Lumber Company had never bothered to copyright Laughead's stories. This combination led to everyone and their grandmother putting out new Paul Bunyan stories, cribbing plenty of concepts and characters from Laughead's pamphlets. New logging camp characters were added, the site of Paul's operations moved from state to state, his size ranged from titanic to merely brobdingnagian, and other professions requiring an equal mix of brute force and quickwitted ingenuity were attributed to him.

With so many contradictory facets to the character, here are the basics you need to know:

Paul Bunyan has a beard, carries an ax, and is big. He's got Babe the Blue Ox as a pet, who is also big, usually said to measure "forty-seven ax-handles and a plug of tobacco between the eyes," but whether those are regular ax-handles or Paul Bunyan sized ax-handles is unclear. In fact his axe is so big, it made the Grand Canyon. Kinda hard to cut trees with that. Paul also runs a logging operation that goes wherever there are trees to cut, with Babe pulling their bunkhouses from one forest to the next. Crew members include the Seven Axmen, Johnny Inkslinger the accountant, Joe the cook, and Ole the blacksmith.

But, no matter who he's got working for him, or where they go, mother nature's always looking to screw them over. The weather's never anything but blistering heat or sub-absolute zero cold, with occasional flood or fog to liven things up. Trees can be so large men can spend most of their lives chopping at one before seeing it fall. Wildlife ranges from the obnoxious splinter cats and gumberoos to the deadly agropelters and snow wassets. And you never know when something utterly bizarre like a Winter of Blue Snow or a cornstalk the size of Jupiter is going to pop up.

Paul and his lumberjacks always tackle these problems with varying measures of brute force (when he wants to get back some logs he sent down the Mississippi, he just has Babe drink from the river until it starts flowing backwards), genuine cleverness (greasing a giant griddle by tying hams to people's feet and having them skate on it), to the just plain ridiculous (when they're plagued by torrential rain, Paul finds where a solid pillar of water is coming down and swims up it; the rain stops, and he comes back down proclaiming, "I turned the damn thing off").

The important part is that the characters, the problems they face, and the solutions they come up with must all be exaggerated to the point where Willing Suspension of Disbelief doesn't simply break, it shatters so hard you can't help but laugh.