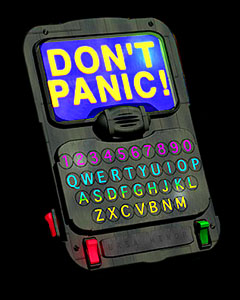 To boil it down to the essentials, Arthur Dent, a fairly normal if rather feckless Earthling, wakes up one Thursday and, after a series of confusing events, is spirited away from Earth by his friend, Ford Prefect, right before the planet is destroyed. He then hooks up with Zaphod Beeblebrox, former President of the Galaxy, current fugitive, and all-around cool guy; Marvin the Paranoid Android, a sarcastic and chronically depressed AI; and Tricia McMillan, AKA Trillian, Only Sane Woman and the only other human being left. Zaphod is on a quest to find The Truth, and everyone else gets pulled along for the ride.