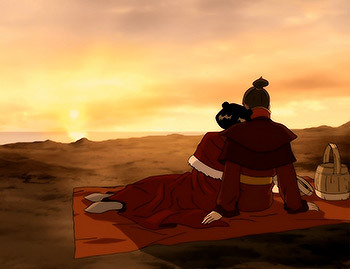 They don't hate watching this.
"Did you notice the sunset for the first time in ages?"
— Alan Jackson, "Where Were You When the World Stopped Turning"
Advertisement:

A couple just watching a sunset. It's often for their own pleasure, based on the romantic connotations, or for a symbolic purpose. They may even be waiting for something that's supposed to happen after the sun sets.

A character who watches the sunset alone can have various connotations, the most common ones being nostalgia, reflectiveness, and/or melancholy. Often symbolizes the end of a period — often a rather happy one — in somebody's life.

When people in anime are Sitting on the Roof, chances are roughly 50/50 they're enjoying the sunset together. If they're on the shore, it overlaps with Ocean Awe.

A Super-Trope to Against the Setting Sun. Usually precedes a Lip-Lock Sun-Block.

Compare Cue the Sun, Heaven Above, Light Is Good, Riding into the Sunset, That Cloud Looks Like..., Meditating Under a Waterfall, Stargazing Scene.

In the final scene of the series, Aang and Katara have a moment watching the sunset before sharing a kiss.

In the final scene of the series, Aang and Katara have a moment watching the sunset before sharing a kiss.