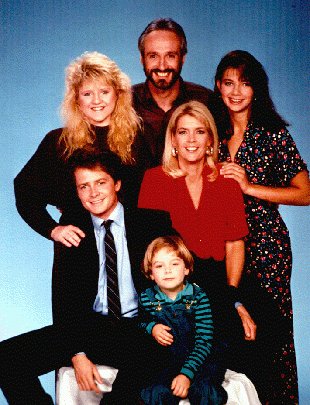 "What would we do baby, without us?
Sha-la-la-la."
—Last lines of "Without Us", the Family Ties theme song.
Advertisement:

Family Ties is a rather straightforward Dom Com that was created and executive produced by Gary David Goldberg, produced by his company, Ubu Productions, and Paramount, and ran on NBC from 1982–89.

Former '60s flower children Steven (Michael Gross) and Elyse (Meredith Baxter Birney) Keaton are now adults living in Columbus, Ohio and raising three kids of their own: hyper-conservative Alex (Michael J. Fox in the role that made him a star), ditzy Mallory (Justine Bateman) and precocious Jennifer (Tina Yothers). A fourth Keaton child, Andrew, is born in the third season and played by Brian Bonsall beginning in season 5.

Much of the humor comes from the conflict between the Republican Alex and the very Democratic parents. In a rare example, there are no Strawman Political sequences to be found here: both ideologies are given equal time in the spotlight, and there is no Strawman Ball episode eithernote  Alex was originally designed as a Straw Conservative, but this was changed when he became the show's most popular character.

Unlike many Dom Coms (and most of the ones made since The '70s), Family Ties is notable in that it features a completely standard, intact nuclear family. The fact that the show had no adopted children, stray cousins, stepkids from previous marriages, older kids living away from home, or single parents (in contrast to My Three Sons, Family Affair, The Brady Bunch, Diff'rent Strokes, Full House, etc.) made it something of a rarity, even for The '80s, not to mention the notorious lack of the backstage turmoil many '80s shows are known to have had.