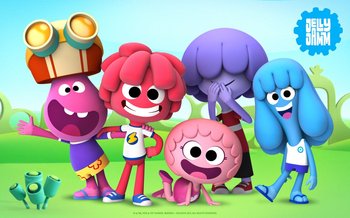 Jelly Jamm is a 3D CG animated series aimed at young children aged 4-7. It focuses on the adventures of five friends, Bello, Goomo, Mina, Rita, and Ongo. These five friends live on the planet of Jammbo, the planet where all music in the universe originates. This makes music a major theme on the show: every episode includes a dance number, and there is music constantly playing in Jammbo (in fact, if the music ever stops, time itself freezes).

It was co-created by David Cantolla, who also co-created Pocoyo, and produced by Vodka and 737SHAKER CAPITAL, two Spanish companies based in Madrid and Segovia. It is, however, made for an English speaking audience. In the UK, it airs on Cartoon Network's pre-K block Cartoonito, and in Canada, it aired on TVOKids. Even more so, it also was created in conjunction with various other studios, including Bandai (yes, THAT Bandai).

Not to be confused with the early 1990's stage musical Jelly's Last Jam, or the Goosebumps book "The Horror At Camp Jellyjam".

The theme begins and ends with the show's title.

The theme begins and ends with the show's title.