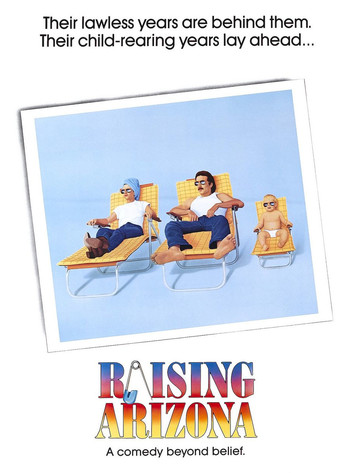 The Coen Brothers' follow-up to Blood Simple, Raising Arizona (1987) begins with harmless criminal H.I. "Hi" McDunnough (Nicolas Cage) and police officer Edwina "Ed" (Holly Hunter) meeting and falling in love during a series of mug shots. They get married, settle down, and decide they want kids. There's one problem: Ed's infertile. They try adopting, but H.I.'s criminal past prevents this. Then, when all seems hopeless, an opportunity presents itself: Furniture magnate and local celebrity Nathan Arizona (Trey Wilson)'s wife gives birth to quintuplets. An off-handed remark about "having more than they can handle" gives H.I. and Ed the idea to kidnap one of the babies, and raise it as their own. So, H.I. sneaks in, and takes Nathan Jr. (we think), and that's when all hell breaks loose. First, H.I's prison buddies Gale (John Goodman) and Evelle (William Forsythe) break out, and hole up at their place. Then a demonic bounty hunter (Randall "Tex" Cobb) seems to spring from H.I.'s nightmares to pursue him. And then he punches out his boss.

Nathan, Jr. is about to become the most wanted baby in Arizona, for all the worst reasons—while H.I. and Ed, who have grown to genuinely love their stolen child, are forced to decide if love is reason enough to keep him.