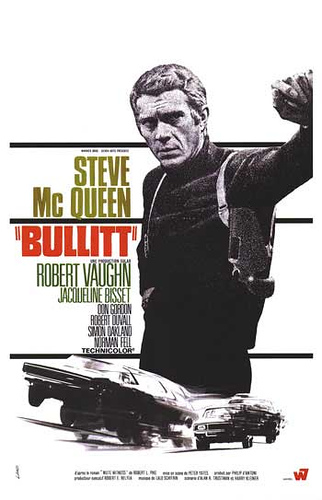 "You work your side of the street, and I'll work mine."
Advertisement:

Highly influential 1968 cop movie set in San Francisco. Steve McQueen stars as the eponymous Lt. Frank Bullitt, a TV dinner-eating, workaday Cowboy Cop (in fact, he's the Trope Maker) who goes after the Mafia hit men who killed a witness he was protecting.

Best known for a legendary, nearly ten-minute-long Chase Scene in which McQueen, largely eschewing stunt men, famously drove a certain green Mustang all over San Francisco in pursuit of two bad guys in a black Dodge Charger. Also one of the first chase scenes filmed with cars at full speed instead of using sped-up film as a cheat.