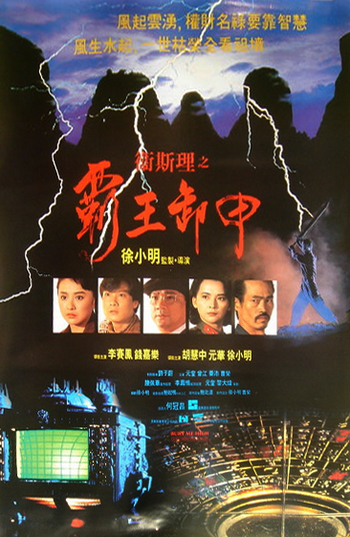 The best action movie about Feng Shui ever made.
Advertisement:

Bury Me High is a 1991 action movie directed by Tsui Siu-ming, and is one of the many spin-off action movies involving Hong Kong pulp novel character, Wisely Wei after The Seventh Curse made the character famous. Starring Chin Kar-lok as Wisely, alongside Sibelle Hu making a comeback with Moon Lee added to the cast, the movie continues the adventure of Wisely where Seventh Curse left off previously.

Wisely is now in America, where he's hired by a rich traveler to investigate the sepulchral veneration of his home's Feng Shui center in the South-East Asian country of Carrinan, in order to secure the continuous wealth and fortune for his family's future generations. Accepting the assignment due to his interest in Feng Shui, Wisely travels to Carrinan with his partner, Professor Chang (Tsui Siu-ming, also director) and a reporter, Anna Wong (Moon). But upon arrival in Carrinan, Wisely and gang discovers the Feng Shui cardinal point of the country has been hijacked by the dictator and warlord General Ngyuen, who is using the local Feng Shui to ensure he maintains an iron grip on the nation.

In case you're confused by all that Feng Shui mumbo-jumbo stuff, let's just say that's just the movie's attempt to use a complicated theme as backdrop for its plot, when in actuality the entire movie is pretty much like every action film about a Badass Crew of heroes assisting an oppressed nation overthrow a dictator's military regime, not unlike The Dogs of War or The Wild Geese, but with more kung fu, feng shui, and supernatural elements thrown in. It's... actually more fun than it sounds. note  I mean, the final battle has tanks! Friggin' tanks! And exploding helicopters! And exploding cliffs! And exploding towers and bunkers! And... okay, I'll stop.

Moon and Sibelle will collaborate once again in their next film, Dreaming the Reality.

Bury Me High, but Shallow enough to Trope...