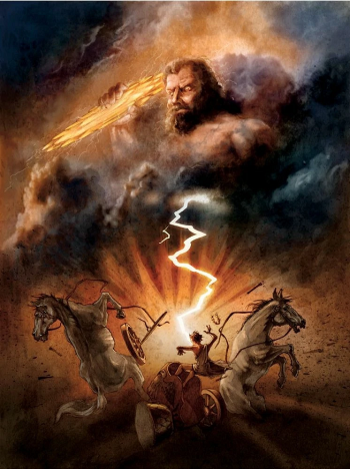 Chariot insurance covers most acts of gods.
Priest of Offler: Offler is a vengeful god!
High Priest of Blind Io: Trigger happy is what he is.
— Feet of Clay
Advertisement:

Annoying the Lord of the cosmos with such things as blasphemy, declaring yourself a god, refusing to go along with Because Destiny Says So, and refusing to believe in him despite all evidence to the contrary tends to invoke his wrath. The most common form of aforementioned wrath? A lightning bolt to the face.

Said lightning tends to come out of nowhere (even indoors) and sends the very clear message that the big guy upstairs is not to be trifled with. A God of Thunder is almost always throwing these out. If God Is Evil, this could happen to anyone For the Evulz. If God Is Good, then only the wicked will live in fear of it.

Occurs in both Classical Mythology and The Bible, making this Older Than Feudalism.

In Tabletop Games, this may be used as a more localized form of Rocks Fall, Everyone Dies, designed to let the Game Master strike down the annoying Munchkin ruining the game without too much collateral damage.

In a commonly seen sub-trope, a character will swear that if they're lying, may God strike them down. God, of course, immediately obliges. Closely related to Heaven Above, since if the sky is divine, then lightning from it will be considered godly too. Compare Holy Hand Grenade and Death from Above. Not to be confused with Dramatic Thunder. Unrelated to Personal Raincloud, though that often involves bespoke lightning bolts as well. A possible final result of God Is Displeased. Gaia's Vengeance could involve lightning bolts, but in that trope the "divine" being is usually less personified.

"You Can't Say That"

Brian (in Chris's body) promptly looks heavenward and launches a Cluster Bleep-Bomb. However, God does not respond and lets Hindu god Indra take over.

"You Can't Say That"

Brian (in Chris's body) promptly looks heavenward and launches a Cluster Bleep-Bomb. However, God does not respond and lets Hindu god Indra take over.