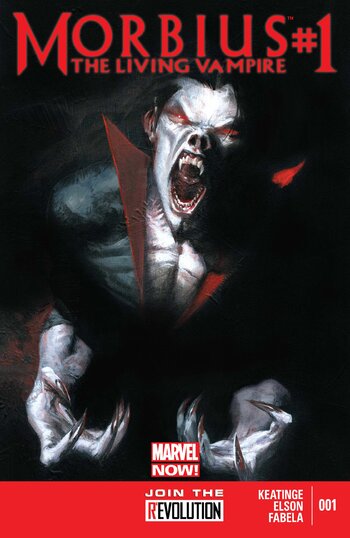 Morbius the Living Vampire is a series of comics by Marvel Comics staring the character of the same name.

Created by Roy Thomas and Gil Kane, Morbius has fought Spider-Man ever since his first appearance in The Amazing Spider-Man #101 (October 1971), occasionally working together or fighting against several other Marvel characters, perhaps most commonly with Blade. He was also seen as a character in Spider-Man: The Animated Series.

Dr. Michael Morbius, also known as "The Living Vampire", was a Nobel Prize-winning scientist suffering from a fatal blood disease. In hopes of curing this illness he treated himself with fluids distilled from vampire bats and, as a last chance, tried shock-treatment as a way to electrically create blood cells. This "cured" him by transforming him into a vampiric human mutate that lusts after blood as a way to counter the disease. He also gained several other vampiric attributes, such as white skin, fangs, an allergy to sunlight (since he isn't undead, sunlight won't kill him outright, but his lack of melanin leads to quick burns), Super Strength, a Healing Factor, and hollow bones which give him the capability of flight. Later he gains more supernatural abilities like hypnosis.

Because of his need to drink blood from living victims (stored blood contains too much anticoagulants for his body to handle, or the need to kill stays even after the physical need is satisfied) Morbius wallows in guilt and tries to find both an alternative substance to blood and a way to cure himself — without much success. At best he has been able to change back into a human for some periods of time, but either has soon reverted back or retained the need to drink blood.

Despite all this, he's generally willing to help or at least unwilling to harm people he sees as innocent or has a closer relationship with, and he has consistently tried his best to only target violent or incorrigible criminals, and he also regularly tries to use his skill and knowledge as a scientist to give back to the community to the best of his ability.

He had a new series in January 2013 as part of Marvel NOW! that lasted nine issues. A new series, written by Vita Ayala and penciled by Marcelo Ferreira, debuted in 2019.

In 2018, it was announced that Sony was developing a film centering on the character for their shared film universe, with Jared Leto in the main role. It has been released on April 1, 2022.

If you were looking for the unconnected Doctor Who story "The Brain Of Morbius", go here.

Morbius: The Living Vampire has appeared in: