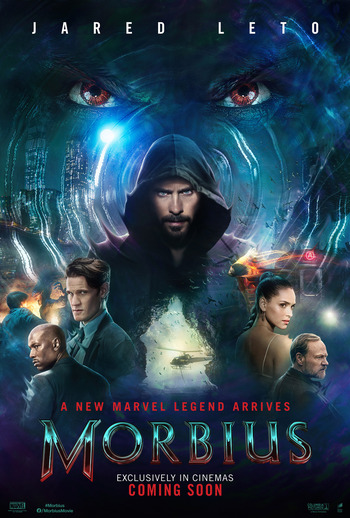 In the shadow of every hero, lies a villain.
"I'd do anything to save a life... but I don't know what I'm capable of."
— Michael Morbius
Advertisement:

Morbius is a 2022 Science Fiction Superhero Horror movie directed by Daniel Espinosa (Life) and the third installment of Sony's Spider-Man Universe after Venom and Venom: Let There Be Carnage. It is based on the eponymous comic book character and stars Jared Leto in the title role, as well as Adria Arjona, Jared Harris, Tyrese Gibson, Matt Smith and Michael Keaton.

Ever since he was a child, medical prodigy Michael Morbius has suffered from a rare and incurable blood disease and has long been his life's goal (and obsession) to save others from sharing his fate. At the brink of desperation, he searches for a cure that goes beyond the realm of traditional science... One that proves successful beyond his wildest imagination.

But what looked like a miracle soon becomes a nightmare as Morbius comes to realize his cure has a terrible price. As he desperately fights back against the horrid thirst for blood the resulting mutation brings, Michael will learn the hard way that sometimes the remedy can be so much worse than the disease...

Morbius: How far are we allowed to go to fix something that’s broken?
Nicholas: Until the remedy is worse than the disease.
Feedback