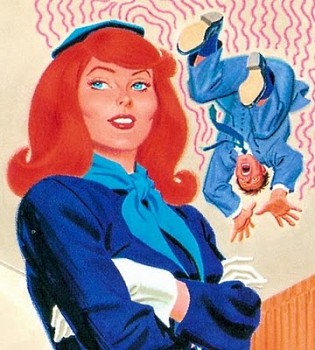 Jean doesn't have to lift a finger to lift Hank.
"...yeah, I can break necks with my mind."
— Tristan, Yu-Gi-Oh! The Abridged Series
Advertisement:

Telekinesis/Psychokinesis: the ability to move stuff and/or people just by thinking. Although it fundamentally only requires a thought to work, hand gestures can also help, especially if they make the user look focused. How does the glass lift up but not everything else nearby? Because the glass is what the hero wanted to lift up.

As superpowers go, it's one of the most useful and straightforward, and in its more refined form, it allows the user to manipulate any object in a wide number of ways, not only the more intuitive lifting and moving around. Nevertheless, it is very rarely used up to its full potential, as almost every fight would become trivial if it ended with a telekinetic Neck Snap. This is usually justified by stating or implying the user is not dexterous and/or precise enough to give his foe anything more than a good rough push or pull, although sheer psychic strength is often enough to crush or squash an enemy in a less subtle way.

Being a Psychic Power, we don't have to worry so much about violating the laws of physics. That said, its major limitation seems to be precisely its scalability: it is almost always harder to lift a heavy object than a light one, and a person with this superpower will often be seen to be visibly straining to accomplish it, as if their telekinesis took the form of a long but entirely physical "invisible arm" with all the normal physical limitations that normally implies. Pushing this ability past its limit often leads to a Psychic Nosebleed or even passing out, and it is even possible to die due to the effort.

This power is the most recognizable form of Psychic Powers, only matched by Telepathy in popular consciousness. As such, they are often more associated with each other than the rest of skills on the list: many telekinetic characters are also telepaths and vice versa, and even whenever they are not, odds are that any strictly telepathic but sufficiently spirited mental duel will have visible, physical effects on the users' surroundings or bodies. Sometimes Flight will be added to the mix as well, as theoretically nothing impedes a telekinesis user from lifting their own body.

For whatever reason, telekinesis seems to be more common for characters outside the usual superhero tradition, as classic The Cape-style superheroes rarely have this as a power. One possible explanation is that if the character is already a Flying Brick, giving them telekinetic powers can run the risk of turning them into an Invincible Hero by giving them too many advantages. In a superhero series featuring an ensemble cast, telekinesis is usually reserved for characters who specialize in it or who are weak in the physical field. Some non-corporeal characters, such as ghosts, can interact with normal matter only via telekinesis. Creatures without fingered hands, or without limbs at all, often will have such powers, allowing them to comfortably interact with the world.

It's also very light in terms of Special Effects demand (no need for expensive fire effects or CG energy projectiles, just use some strings or an air-cannon to blast stuff around), making it popular with Live Action shows. It's also very simple to pull off in 3D animation. See Coconut Superpowers.

Single Substance Manipulation is a Sub-Trope for when this can only be done for one type of object, with sand, glass, and paper being sub-sub-tropes.

If the character has a native set of powers that's not Telekinesis that can be used to move an object such as enclosing it in a forcefield and moving the forcefield, that would be a case of Swiss-Army Superpower.

Note that the term "mind over matter" originally had nothing to do with telekinesis, it was coined in reference to what Tropers would call Heroic Willpower (or maybe Charles Atlas Superpower); the mind forcing the body beyond its normal limits.