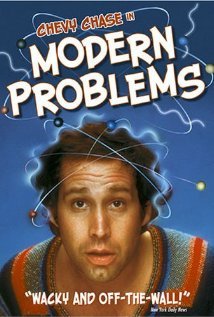 An odd 1981 comedy film that follows the I Love Nuclear Power trope, in which Max Fiedler (Chevy Chase) goes through bad situations in his life, with the final one being that his girlfriend dumps him for a Jerk. After leaving a party one day (at a gay bar in Downtown Manhattan), he drives behind a nuclear waste truck dumping nuclear waste on him and his car.

He soon comes home glowing like a green neon sign and goes to bed. The next day he accidentally breaks his mug, not fully knowing that he has superpowers.