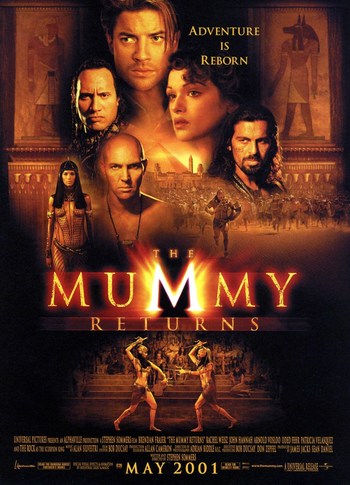 The Mummy Returns is the 2001 sequel to the 1999 remake of The Mummy and the second entry in The Mummy Trilogy. It is written and directed by Stephen Sommers. It was released on May 4, 2001.

Set in 1933, the film features the now-married Rick and Evelyn O'Connell (Brendan Fraser and Rachel Weisz) and their inquisitive 8-year-old son, Alex (Freddie Boath). Imhotep (Arnold Vosloo) is once again resurrected by an Egyptian cult led by Baltus Hafez (Alun Armstrong) to steal the supernatural Army of Anubis from the Scorpion King (Dwayne Johnson in his film debut), an ancient immortal warlord who will use the army to end the world if he is awakened. When Alex is kidnapped during a raid on the O'Connell's home, they must get their son back and save the day.

Followed by The Mummy: Tomb of the Dragon Emperor.