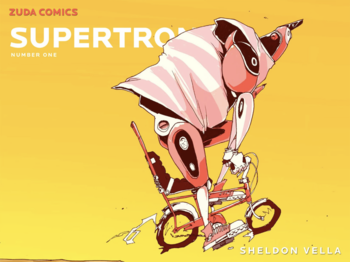 Somewhere in the future, robots rule the land. Toxic pollution and poisonous haze replaces the clouds and sky we once knew. Humans all but eradicated by their own hand. In this mechanical wasteland lives 2 robots with unprecedented power and wit. This is their story.
— Opening Monologue
Advertisement:

Supertron is a…peculiar webcomic from Sheldon Vella that was initially released by DC's Zuda Comics in January 2008 until 2010. In a distant future where robots control everything and humans have pretty much gotten most of themselves killed, there resides two particular robots; Spinbot, the "leader" of a robot gang called "The Dizzy-Bots", and Supertron, who was just burning some ants. After having a fight, Spinbot ends up using his three punishment strikes (ruining clothes, missing curfew, and dropping the F-bomb), which gets noticed by an entity they refer to as Mom-Bot or just "Mom". Blaming Supertron for his misfortune, the two 'Bots find themselves racing against the clock to tell on the other to "Mom". On the way, the two end up going on their own separate journeys to manhood.

And man, are those journeys as weird as hell.