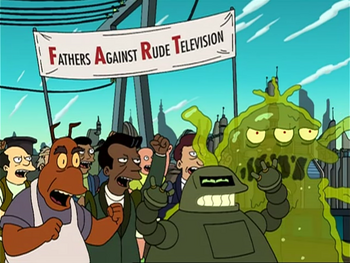 This image is brought to you by the
Center for Really Awesome Pictures.
Maria Hill: What does S.H.I.E.L.D. stand for, Agent Ward?
Grant Ward: Strategic Homeland Intervention, Enforcement and Logistics Division.
Maria Hill: And what does that mean to you?
Grant Ward: It means someone really wanted our initials to spell out "shield".
— Agents of S.H.I.E.L.D. pilot episode
Advertisement:

D.E.S.C.R.I.B.E.: Descriptions are Every Sustainably Cool and Rad Trope that begin every said Trope even I've Been Everywhere to find it.

In fictional (and sometimes not so fictional) acronyms, priorities are reversed. It's not so important that the full name be clear, memorable and to the point; it matters much more that the actual acronym spell out a word or phrase, preferably a meaningful, impressive (or just plain funny) one. This results in "backronyms", acronyms created before the names they allegedly stand for — if the acronym even stands for anything at all. In other words, fiction tends to go for Appellations Creatively Relevant, Occasionally Nonsensical, Yet Meaningful. Shit.

For instance, no writer would have allowed New York's police force to come up with the abbreviation "NYPD". That can't even be properly pronounced. No, they'd have named it, ehm... something like the Central Organization of Police Specialists. It doesn't matter so much that the full title is essentially meaningless — we got it to spell out COPS!note COPS actually stands for Community Oriented Policing Services in the U.S. Justice Department. Heck, we can even sell some toys now! Or, you know what would be better than COPS, would be JUSTICE! So what does JUSTICE stand for? Nothing. That's right, we don't even need it to stand for anything if we don't want it to!

This isn't just for names that are cool, of course. It's also for names which accidentally hint at the true nature of an organization (e.g., a pro-tobacco council with the name CHOKE), or just as "accidentally" spell out something naughty or undignified.

In government, military, and engineering contexts, this is absolutely Truth in Television, probably because there are so many acronyms in those fields that nobody can remember them if they don't have a nice mnemonic. That Other Wiki calls it a backronym.

Technically it's only an acronym if you pronounce it as one word (like "laser" or "scuba"), and if you spell out the letters, it's an initialism. In practice, most people just use "acronym" for them all, so feel free to add them as examples.

In case it's still unclear, an ACRONYM is A Concise Representation Of Nomenclature Yielding Meaning.

''Brought to you by the Total Vernacular of Television, Radio and Organized Presentations, Electronically Supplied.''

The Guardian Units of Nations (or GUN) of the Sonic Movie Universe is created specifically to deal with alien lifeforms.

The Guardian Units of Nations (or GUN) of the Sonic Movie Universe is created specifically to deal with alien lifeforms.