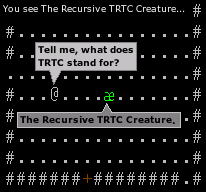 Dilbert: Wally, would you like to be on my TTP project?
Wally: What does "TTP" stand for?
Dilbert: It's short for The TTP Project. I named it myself.
— Dilbert, May 18, 1994
Advertisement:

An acronym in which one of the letters inside the acronym stands for the acronym itself. Because of the way English phrases such things, attempting to fully expand the acronym causes an infinite recursive loop.

Extraordinarily overused in computing culture for their giggle value, but absolutely straight-faced serious examples can be found in the business world and elsewhere.

See also Fun with Acronyms and Shoehorned Acronym. Not to be confused with the RAS syndrome