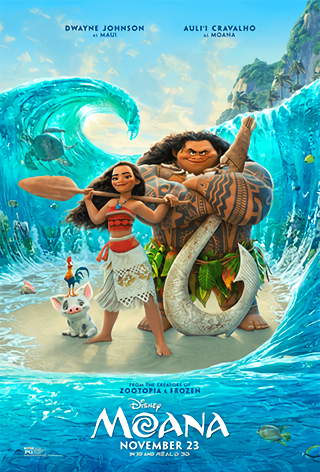 "The ocean is calling."
"♫ There's a line where the sky meets the sea and it calls me,
But no one knows how far it goes.
All the time wondering where I need to be is behind me.
I'm on my own, to worlds unknown! ♫"
—Moana
Advertisement:

Moana Waialiki lives on a beautiful island where she is set to become the next chief of her tribe. But when the crops start failing and fish flee the inshore waters, Moana believes that the island's troubles are linked to the legend of an encroaching "darkness" created when the demigod Maui stole the heart of the benevolent creator goddess Te Fiti.

Recognising her compassion and wanderlust, the ocean itself entrusts Moana with the lost heart of Te Fiti. Defying the wishes of her protective father, Moana embarks on an adventure across the turbulent and monster-filled seas to track down Maui and force him to return the heart of Te Fiti before the darkness swallows all life on the ocean.

It was a highly-anticipated film, originally to be done in the Paperman style of animation before it was changed to a more conventional form of CGI. It features Moana as the first Pacific Islander Disney Princessnote "chief's daughter", strictly speaking (and second Pacific Islander protagonist after Lilo Pelekai) and the fifth non-European one.

The cast includes Dwayne Johnson as Maui, newcomer Auli'i Cravalho as Moana, Temuera Morrison as Moana's father, Tui Waialiki, Nicole Scherzinger as Moana's mother, Sina Waialiki, Rachel House as Gramma Tala, Jemaine Clement as Tamatoa, a giant crab monster, and Alan Tudyk as the chicken Heihei. It reunites the directing power duo of Ron Clements and John Musker, the men behind The Little Mermaid, Aladdin, Hercules, Treasure Planet and The Princess and the Frog. The film features seven original songs by Lin-Manuel Miranda and Opetaia Foa'i, and the score is written by Brother Bear and Tarzan composer Mark Mancina.

The film was released on November 23, 2016, preceded by the short Inner Workings.

The first teaser trailer is here

, a teaser that aired during the Olympics is here

, an international trailer is here

, and the official trailer is here

In October 2016, Disney announced that the film will be the first motion picture to be fully dubbed in the Tahitian language, marking the second time Disney released a special dubbing dedicated to the culture which inspired the film.note the first being the Zulu dub of The Lion King This led to subsequent special dubbings in Maori and Hawaiian often with the original voice actors reprising their roles in their native languages.

During Disney's Investor Day on December 10, 2020, it was revealed

that an animated series (which shares the movie's name and will dive deeper into the Pacific Islands' mythology) based on the film will be released on Disney+ come 2023.

Tropes associated with Moana include:

Near the end of his musical number, Maui traps Moana in a cave, and she then proceeds to call him out.

Near the end of his musical number, Maui traps Moana in a cave, and she then proceeds to call him out.