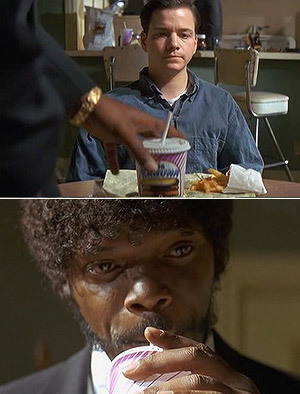 This is a tasty burger!... Do you mind if I have some of your tasty beverage to wash it down?"
"The best tasting food is stolen from the mouths of the enemy."
— Griff, World of Warcraft, "War Forage"
Advertisement:

A classic tactic of psychological warfare.

You've just met someone. They don't know what to make of you. They happen to be eating at the time. What do you do?

Take their food. It's a step beyond just invading personal space, and it shows who the alpha dog is. Unless it is really called for, it comes across as very insulting and a way to make the offensive party appear unlikable. Frequently the victim is too stunned by the audacity of such a move to protest.

May overlap with The Snack Is More Interesting and Lost Food Grievance. See also The Bully, who is known to beat people up for their lunch money. Food Interrogation is when somebody tries to bribe another person with food to get information.

Compare to Filching Food for Fun when it's done in secret for fun and excitement or out of petty revenge. Compare to Robbing the Dead when a character takes food from someone they have killed. While Enemy Eats Your Lunch is about establishing dominance, Robbing the Dead shows the character's cavalier or pragmatic attitude to death. Compare Villainous Face Hold, another way of asserting dominance by invading personal space.

Contrast They Wasted a Perfectly Good Sandwich, where a meal is abandoned as the result of a conflict, and No, Mr. Bond, I Expect You to Dine, a psychological gambit based on offering the hero food.