Literature / The Forest of Doom 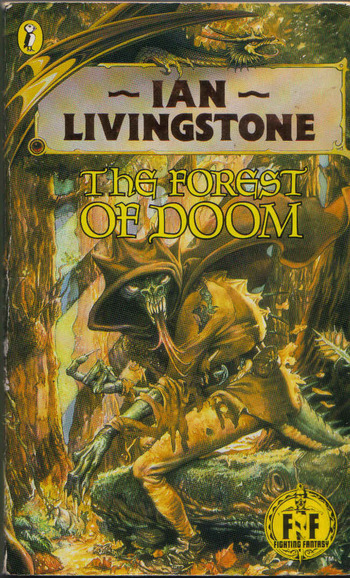 Only YOU can prevent shapeshifters from disrupting your quest.
Advertisement:

The Forest of Doom is the third entry in the Fighting Fantasy series of gamebooks, written by Ian Livingstone.

You are a sword for hire, owning nothing but your weapon, a leather armor and a rucksack for your possessions. You're travelling north, looking for a job, when you stumble into a wounded Dwarf, delirious from the poisonous arrows in his body. In his final moments, the Dwarf mentions a precious Hammer he must find in the dreaded Forest of Doom and deliver to someone named Gillibran in Stonebridge, as well as a sorcerer, Yaztromo, living in a tower south of the Forest. After burying the Dwarf and taking his money pouch, you head south towards Yaztromo's tower to begin a dangerous task: recover the Hammer of Stonebridge, split in half and lost in the depths of the Forest of Doom, and take it to Stonebridge, currently besieged by Trolls, in order to save the Dwarves from destruction.

The Forest of Doom is the standard Livingstonian adventure: a dungeon crawl where the dungeon's walls and ceiling are made of trunks and branches. While there are multiple paths across the Forest, only a specific one will allow you to find both parts of the Hammer and bring them to Stonebridge. Should you fail to find one of the two Plot Coupon pieces (or any at all) you're given the chance to restart from the beginning... if you can survive a certain life-or-death roll.

It also contains the first appearance of Yaztromo the Wizard, an important background character of the series, as well as the locations of Darkwood and Stonebridge. Has a sequel in Temple of Terror and the battle for Stonebridge is mentioned and seen in Caverns of the Snow Witch.

The Forest of Doom provides examples of: