Riddle for the Ages 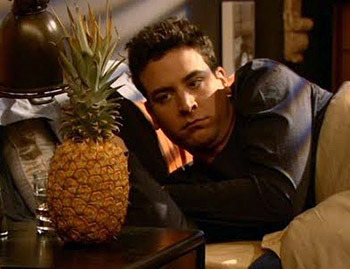 It's been 25 years since it happened, and he still doesn't know how that pineapple ended up on his nightstand.
"What I couldn't work out was how he managed to make another man pregnant. I guess we'd never know. So, just to restate, that is something we'll never know; you're not going to find out later."
— Rick Dagless, Garth Marenghis Darkplace
Advertisement:

It is the nature of mysteries that people want to find answers, and since fiction is in the business of giving people what they want, just about any mystery introduced in a story is going to be resolved. Important character gets murdered? We're gonna find out who the culprit was. The Eiffel Tower disappears? We're gonna find out where it went and why. Someone blacks out and wakes up three days later wearing antique samurai armor and a pink cowboy hat? We're gonna find out what led them to that state of affairs. While mysteries might sometimes be left unanswered inadvertently (such as a series being abruptly canceled, or the writers simply forgetting the mystery exists), if the people in charge know what they're doing, for every mystery introduced there's going to be an answer introduced somewhere down the line.

Except when there's not. Sometimes writers will create a mystery but never have any intent of actually giving us an answer. Bob will wake up one day to find that $10,000,000 has appeared in his bank account, or Alice will discover that someone's rearranged all her furniture while she was out. They might brush these matters aside cavalierly, or they might become obsessed with discovering the truth, but eventually they come to realize that, if they're ever going to get an answer, it's not going to be any time soon, and write off their respective mysteries as "one of those things".

This might be done for comedic effect, as part of a Mind Screw, or just to reflect reality. After all, how many of us have had something weird happen in our lives but never discovered the "why" behind it all? Like all tropes, this sort of mystery can be used to tell really good or really horrible stories depending on the writers' skills, though if you're introducing an answerless mystery, it's generally considered good form to let your audience know they're not getting an answer. It's not quite fair to present viewers a mystery, suspects, and clues that clearly have some sort of resolution, if only in the author's head, but never say what it is. Make it clear that you're not going to let people in on an important secret that you or someone on the production staff knows the answer to, and years might go by and people will still be asking you, "Why did X commit Y on Z?"

Please note that, to keep the examples section from getting bogged down, we should list only cases where a mystery is left unanswered and, either through context within the story or via Word of God, we know it was never meant to receive an answer. Without either of these things, it should be assumed that the writers meant to answer the mystery, but have not yet gotten around to doing so.

Super-Trope of Maybe Magic, Maybe Mundane. Cousin of the Cryptic Background Reference (they both add to the sense of a larger universe by leaving unexplained mysteries). See The Unreveal. Compare Noodle Incident, The Unsolved Mystery, What Happened to the Mouse?, Missing Secret, Ambiguous Situation and some Big Lipped Alligators. A common feature of a Mockstery Tale, and may lead to Wild Mass Guessing and Epileptic Trees. For a whole setting made up of these, see World of Mysteries.

Not to be confused with A Riddle Wrapped in a Mystery Inside an Enigma.

Which three books would you choose to rebuild civilization?

Which three books would you choose to rebuild civilization?