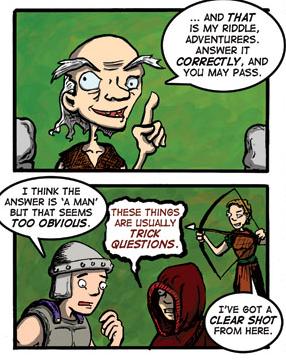 Always Take the Third Option.
If be it your hubby,
wish you to see,
this haunting be-riddle
answer you'll me!
— Riddler's Gammon, by Andrew Hussie

When Only Smart People May Pass, a challenge is often given in the form of a riddle. The solution to said riddle is often, in itself, the means by which the characters may continue. (Unless the characters are Genre Savvy, in which case it may turn into Only the Knowledgable May Pass.)

This sort of riddle game is sometimes also used for other purposes than determining whether someone may pass. For example, it may be for a reward of an item or information.

Sub Tropes include Riddling Sphinx (the tendency of sphinxes to do this), Riddle of the Sphinx (a particular riddle that's very popular), These Questions Three... (combining this trope with the Rule of Three).

No relation to the comedy podcast Answer Me This.